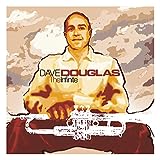 The Infinite is one of Dave Douglas's more "mainstream" dates, in that it features standard quintet instrumentation—save for Uri Caine's sparkling, superbly played Fender Rhodes. Paradoxically, though, this is also a record that finds Douglas loudly declaring his love for some current pop music. It opens with a tender reading of Rufus Wainwright's "Poses" and goes on to cover songs by Mary J. Blige ("Crazy Games") and Bjork ("Unison"). Douglas also tips his hat to Radiohead's lead singer on the restless and rhythmically shrewd original "Yorke." (Interesting to note that Radiohead has been using a bit of Fender Rhodes lately.) But ultimately, The Infinite is about burning quintet interplay through and through; Douglas is not necessarily trying to make a pop-meets-jazz point. The pop songs are in the band's book because their content is strong, firing Douglas' imagination as an arranger. And when Douglas gets through with them, they're a seamless aesthetic fit with the originals.

Chris Potter, on tenor sax and bass clarinet, continues the inspired rapport he began with Douglas as a member of the Magic Triangle and Leap of Faith quartet. Same goes for bassist James Genus, whose rock-solidness is underscored by the hip, unpredictable drumming of Clarence Penn. Uri Caine's Rhodes, in particular, brings to mind some of Miles' early electric music, e.g., Water Babies or Miles In the Sky. But listen to the seductive rubato sections in the midst of the otherwise grooving "Penelope" —a track that includes a surprisingly direct, slowed-down reference to "Boplicity" from Birth of the Cool—and you can hear the kind of uniqueness Douglas brings to the concept. There's a similar depth to "Waverly": it's a Trane-like waltz, but it's more than just that.

This band was absolutely astonishing when it premiered at the Village Vanguard in February of 2001. A studio effort, it must be said, could never quite match that kind of intensity. But The Infinite is still one of Douglas' most absorbing —and accessible — statements to date.