Home » Jazz Articles » Myra Melford Be Bread: The Image of Your Body

By Troy Collins
September 20, 2006
Sign in to view read count 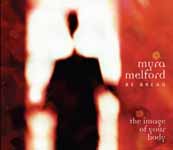 Pianist Myra Melford has an abiding interest in India. She cites the writings of the Sufi mystic poet Rumi, as well as her own harmonium studies there, as major influences on her writing, again borrowing from the subcontinent's traditions on this album. Many of these pieces were composed on melodica, enriching them with a strong harmonic foundation and lyric character that she transposes into a sumptuous group sound.

Melford's core trio of veteran bassist Stomu Takeishi (from two of her ensembles, Crush and The Tent) and newcomer drummer Elliot Humberto Kavee is joined on alternating tracks by trumpeter Cuong Vu or guitarist Brandon Ross for a set of compositions that are equally informed by Eastern and Western music traditions.

Brandon Ross plays banjo on the ethnic explorations of the title track and "Be Bread," adding an element of sonic authenticity to the proceedings. Plugging in, his electric guitar burns on the brief "If You've Not Been Fed," plying long tones and sustained harmonics over a deconstructed, loping funk pulse. Ross soars on the aptly titled "To The Roof," the album's energetic, emotional climax. Melford introduces the piece with tender, lyrical fragments before he enters, slowly building together in intensity until the piece explodes in an outpouring of electric fervor and resoundingly dramatic pianism, driven by a boisterous rubato rhythm.

Melford is resplendent at the piano. The melodious improviser's exquisite lyrical sensibility is never overshadowed by her vivacious energy. Equally capable of delicate introspection and spry commentary, both of which are featured prominently on "Luck Shifts," she chooses her methods wisely. "Yellow Are Crowds of Flowers, II" reveals her outré side, with a pneumatic solo full of unbridled passion and barbed commentary that's breathtaking in its intensity.

An estimable merger of electro-acoustic improvisation with Eastern song forms, The Image of Your Body demonstrates how Melford's luminous writing transcends the boundaries of genre and style.

Visit Myra Melford on the web.

Equal Grace; Luck Shifts; Fear Slips Behind; To The Roof; Yellow Re Crowds of Flowers, II; The Image of Your Body; Be Bread; If You've Not Been Fed; Your Face Arrives In The Redbud Trees; Made It Out.