By Edward Blanco
September 20, 2006
Sign in to view read count 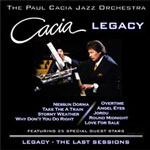 A trumpeter whose high-register playing style has been compared to the late Maynard Ferguson, Paul Cacia releases his tenth album and first in the last fifteen years with Legacy—The Last Sessions. It's essentially a compilation of studio sets during the years from 1991 to 2005 recorded with some degree of participation from 25 well-known big name jazz artists (among them Don Menza, Pete Christlieb, Bill Watrous, Tito Puente, Jack Sheldon, Pete and Condi Candoli, and Louie Bellson), some of whom have since passed away, hence the title The Last Sessions. The special guest list also includes legendary arrangers Sammy Nestico, Bill Holman, Ernie Wilkins and Pete Rugolo.

Mastered in HDCD technology, the audio quality here is superb, leaving you with the feeling that you're sitting in the front row of a concert. The music includes straight-ahead big band jazz playing, one classical piece and eight pop/jazz standards, like Billy Strayhorn's "Take The "A Train, "Stormy Weather, "Round Midnight and Cole Porter's "Love For Sale. It was a bit surprising to hear a jazz album open up in a classical mode with Puccini's "Nessun Dorma, which Cacia dominates, soloing in the high-note fashion which has become his trademark. There is a terrific rendition of "Take The 'A' Train, spruced up with tasty solos from Don Menza (tenor), "Snooky Young (trumpet) and the leader.

One of the best pieces on this album is "Why Don't You Do Right, with the only vocals, provided by the sensuous Jennifer Wood, whose sultry voice does the trick. Featuring the performance of no less than eighteen all-stars, Pete Rugolo's "Overtime is a bouncy number with an array of brief solos. Cacia shines with a substantial solo performance on both flugelhorn and high trumpet on the soft and slithering "Angel Eyes. The sessions end with a slow version of "Round Midnight and a percussive Latin-tinged "Love For Sale, featuring the late Tito Puente on timbales.

Given the number and caliber of talented people Cacia assembled, albeit in a piecemeal fashion, to complete this project, I was left a bit disappointed about the shortage of material to savor. At only 38 minutes, this is one of the briefest big band albums I've heard. Nevertheless what I did hear managed to grab my attention. Legacy—The Last Sessions is a respectable recording containing exciting sonically enhanced interpretations of some well-known standards. With star-quality personnel, the musicianship is first-rate. In spite of some glaring shortcomings, this is one big band album that was worth the wait.

Nessun Dorma; Take The "A" Train; Stormy Weather; Why Don't You Do Right; Overtime; Angel Eyes; Jordu; Round Midnight; Love For Sale.