The Common Quartet: The Hive

By DAN MCCLENAGHAN
November 14, 2016
Sign in to view read count 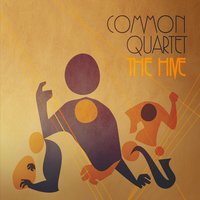 The first spin of any particular recording is more often than not a cursory affair, a listening experience done without undivided attention; and The Hive, by the Brooklyn-based Common Quartet, under these conditions, seemed to have a West Coast cool jazz vibe. And saxophonist Seth Trachy brought Paul Desmond, of the Dave Brubeck Quartet, to mind, even though he's on tenor, versus Desmond's alto. That may or may not be an accurate first impression (though it lingers). The important thing with the initial listen: can it get through to less less than fully engaged ears and induce another spin? And The Hive does just that.

This is a standard jazz quartet, saxophone in front of the piano/bass/drums rhythm, with an equality of input that gives the sounds an energized chamber feeling, on the opener, "Zam," penned by saxophonist Trachy. It's a tune the builds momentum, then pulls back for pianist Nitzan Gavrieli's angular solo, backed nicely by drummer Alex Wyatt's percussive rumble-jumble. Bassist Pablo Menares-penned "Lem," is an inward reverie, featuring guest Steve Cardenas on guitar, on a tune that floats like a cloud, buoyed by drummer Wyatt's light, shuffling touch. Pianist Gavrieli's "Gemmi" shifts the mood to mysterious, with perhaps a middle-eastern flavor; and drummer Wyatt's casts a beautiful, elegiac spell.

With the shared tune-smithing, the group still holds onto a cohesive sound, and maintains it with a couple of standards, a zingy take on John Coltrane's "Lazy Bird," and a relaxed-yet bold roll with Charlie Parker's "Big Foot," on this very promising debut by the Common Quartet.

About The Common Quartet