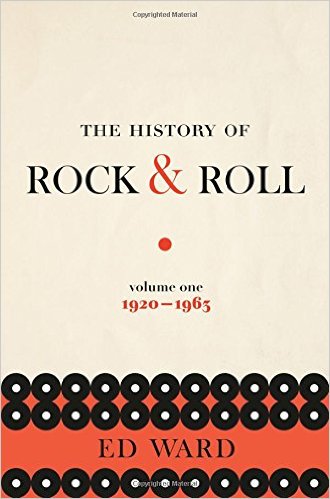 Ed Ward has been the Rock & Roll Historian on NPR's Fresh Air (WHYY, Philadelphia—Terry Gross) for thirty years. He is the author of Rock of Ages: The Rolling Stone History of Rock & Roll (Summit Books, 1986). With his bona fides established, Ward has begun his magnum opus in his The History of Rock & Roll, Volume 1: 1920—1963. Ward is taking an ecumenical and all-encompassing approach to addressing America and her music, making straight the highway.

After 60 years of blues and folk reportage seeking to define the Ur-American Music and thinking it found in Robert Johnson, our romantic aspirations for the intenerate musicians playing house parties throughout Mississippi and Arkansas Deltas were torpedoed with the knowledge that Johnson was just one more kid who listened to a lot of records, a fact magnified by Elijah Wald's essential Escaping the Delta: Robert Johnson and the Invention of the Blues (Amistad Press, 2004).

So with every inch of the before, during, and after of Rock & Roll. Ed Ward's thoroughly-researched opening portion of this music history is inundated with record label minutia that could easily stand against any baseball statistics thought completely esoteric...and oh so delicious. If the devil is in the details, then so is the near-sensual joy of learning them all and spinning them into a coherent story that does the biggest artistic movement of the 20th Century proud. Ward is liberal with his history hinges, the first appearing during a discussion of the early talent searches outside of metropolitan areas (this one specifically held in Bristol, Tennessee from July 25 through August 5, 1927), sponsored Victor:

On August 1, a trio from Maces Springs, Virginia, sat before the microphone, the Carter Family, A.C. and his wife, Sara, and Sara's sister, Maybelle. They wound up recording six sides that day and the next. On August 4, a singer Peer met in Mississippi—who'd been rejected by H.C. Speir [who introduced Tommy Johnson, Charlie Patton, Son House, Skip James, and Robert Johnson to record companies]—recorded. He's come to town with his own group, the Tenneva Ramblers, but something happened—nobody really knows what— and so Jimmie Rodgers recorded without them...

Within four days, the two most important entities in what would become "country music" were discovered and recorded. Ward deftly introduces the white and black musicians who entered the stream that would become Rock & Roll. He draws a long thread through W.C. Handy and Mamie Smith all the way to John Lennon and Keith Richards. Ward's grasp and presentation are exhaustive and the tale he tells is one of artists, managers, record labels, music stores, and all that accompany these things.

Were we to considered Ed Ward's story of rock & roll, a mathematical/geometric analogy would be in order. In Ward's estimation, rock & roll between 1920 and 1963 can be seen as an ellipse. An ellipse has two focal points. The focal points in this present history are Elvis Presley and Ray Charles as one point and the Beatles and the Rolling Stones as the other. That said, Ward leaves no one out, detailing country, western swing, blues, gospel, soul, and jazz influences, each with its integral influence on the matter at hand. The book builds momentum as it approaches 1963, where history (Martin Luther King's "I Have A Dream" and the John F. Kennedy Assassination) intersects with the quickening of the music (The Beatles: Please Please Me and With The Beatles; early The Rolling Stones and The Beach Boys: Surfin' USA, Surfer Girl, and Little Duce Coupe. The year 1963 is a great hinge to break on, making Volume 2 of this series something to expect!