By Glenn Astarita
February 11, 2017
Sign in to view read count 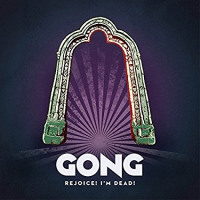 Vocalist, guitarist and composer, Daevid Allen was perhaps progressive rock's favorite hippie, and in the 1960s co-founded pivotal and revered Euro outfits, Gong and Soft Machine. Since the late 60s, Allen embarked on a solo career and led various psych-rock ensembles amid resurgences of Gong, which is an entity that sports a manifold legacy, spanning disparate stylistic approaches. Up until his death from cancer in 2015 Allen was all over the map via his cosmic explorations and collaborations with like-minded artists. Otherwise, the end results of Rejoice I'm Dead exceed expectations, since it's been noted that Allen asked his bandmates to carry the Gong torch after his passing.

With Gong's 28th release, spanning various personnel changes and periodic leanings toward psychedelic space rock or jazz fusion and prog, former members, guitar great Steve Hillage and venerable reedman Didier Malherbe appear on select tracks to round out the core ensemble. It's an utterly engaging studio set that bridges a sense of antiquity with a hearty sojourn into nouveau prog-based fabrics of sound, devised on memorably melodic and hummable tunes along with pensive choruses that only get better on repeated spins. Indeed, you know it's a success when you can't get the songs out of your head afterwards.

Many of these works are built on thrusting or ethereal electric guitar parts by Fabio Golfetti and Kavus Torabi, as the band customarily injects rumbling vaults into the netherworld and hearty space jams, often shaded by Ian East's jazzy sax phrasings. But they toss a curveball into the mix with "Kapital," which is a piece that draws from anarchistic post-punk and topped off with East's wily free jazz soloing. "Beatrix" is a piano and sax driven ballad and one of three tracks that feature Allen's vocals or brief incantations. However, "The Unspeakable Stands Revealed" is sketched on bassist Dave Sturt's (Jade Warrior) prominent e-bass lines and delightfully engineered harmonies with the frontline. Here, the ensemble merges a hypnotic, effervescent groove with the guitarists' waves of sound, tinted with echo and reverb processes and elevated with scathing solo jaunts, affable motifs, streaming EFX and heavy riffing.

They finalize the up-tempo festivities with another multi-phased prog assault "Insert Yr Own Prophecy," where enchanting harmonies and swiftly executed cadences are circumnavigated with thorny time signatures and fierce exchanges. Nonetheless, the Gong legacy gets a blast of adrenaline when considering the fruitful output and sustainable themes evidenced on this wonderful outing. To some extent, it seems like the album tenders a mini-composite of psychedelic, prog, jazz & jazz rock with a reimagination of the band's historic imprint and stylistic variations.

The Thing That Should Be; Rejoice!; Kapital; Model Village; Beatrix; Visions; The Unspeakable Stands Revealed; Through Restless Seas I Come; Insert Yr Own Prophecy.