By John Sharpe
September 2, 2020
Sign in to view read count 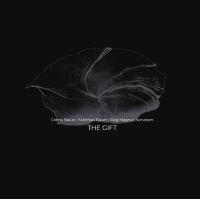 Two elder statesmen of the German free scene, trombonist Conrad Bauer and his younger brother bassist Matthias Bauer, combine with Berlin-based Norwegian drummer Dag Magnus Narvesen to collectively sculpt The Gift. Bauer senior emerged from the then East Germany in the company of Ernst-Ludwig Petrowsky and Gunter Baby Sommer in the mid'70s, and has become recognized as one of Europe's foremost trombone improvisers. His sibling has carved out a name for himself in both improv and new music, particularly as a soloist, but might perhaps be best known to American audiences for his role on trumpeter Bill Dixon's Berlin Abozzi (FMP, 2000).

Recorded live, the limited edition LP presents three selections from a 2018 concert in the typically reverberant ecclesiastical setting of the Christuskirche in Berlin. Conrad Bauer is renowned for his expertise in making musical use of techniques such as circular breathing and using his voice in tandem with his embouchure to generate multiphonics, in essence chords instead of single pitches (heard to good effect in the unaccompanied start to "Gift II"). Matthias spends as much time in the spotlight as his older sibling. His bowed bass is often the highest pitched instrument in earshot, and his wonderfully soaring lines pay ample testament to his record of solo recitals and contemporary music commissions.

Narvesen, who appears regularly with iconoclastic pianist Alexander von Schlippenbach and helms his own DaMaNa octet, supplements the brothers Bauer with supportive color. His responsive rattle, clatter and tap, which sometimes solidifies into propulsive lurch, has the major advantage that it doesn't constrain the group interplay. The trombonist's measured delivery often contrasts with Narvesen's clanking momentum and the cello-like stylings of the bassist. On the whole it is an gentle understated outing, nonetheless rich in drama, as the focus of attention shifts imperceptibly between the players.

It all comes together on the lengthy "Gift III," which takes on suite-like proportions. Notable among the highlights is the passage towards the end where Conrad Bauer inserts some joyful boppish phrases into an ongoing drone, giving the illusion of two complementary instrumental voices. That sums up the disc: extraordinary skill undemonstratively employed to create enjoyable and absorbing results.