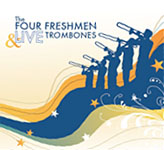 Over six decades ago, four undergraduates at Indiana's Butler University first joined their voices in song as The Four Freshmen and, in 1950, the quartet was heard by Stan Kenton, on whose trombone section the "Frosh" had modeled their sound. Kenton immediately demanded that the group be signed by his label, Capitol, and began an association which lasted over fifteen years. During that time, the Four Freshmen blossomed into a vocal group whose influence ranged from the Beach Boys to Take 6 and the The Manhattan Transfer, the latter of whom employed the "Frosh" in a guest role on their Grammy-winning album Vocalese (Atlantic/Rhino, 1985) .

In 1955, the Freshmen teamed with Kenton's erstwhile eminence grise, Pete Rugolo on the Capitol LP Four Freshmen and Five Trombones, featuring an all-star trombone quintet drawn primarily from various Kenton ensembles, and the group followed this up with another trombone album (once again arranged by Rugolo) nearly a decade later. In September, 2009, the current edition of the "Frosh" appeared in concert with five A-list Hollywood session trombonists at the West Coast Jazz Party in Irvine, CA, where this CD was most brilliantly captured by group member Brian Eichenberger and recording engineer Mitch Grant.

The "Frosh" have very wisely retained most of the original Rugolo arrangements (Rugolo celebrates his 94th birthday on Christmas Day, 2009), although Scott Whitfield (himself an ex-singer with the Pied Pipers and currently performing in a Jackie-and-Roy-styled duo with spouse Ginger Berglund) has contributed the instrumental charts to "It's All Right with Me," "Early Autumn" (in which he also invokes the saxophone sound of Woody Herman's Second Herd), and "September Song" , which the original Freshmen recorded with June Christy and the Kenton band on Road Show (Capitol, 1959). The vocal arrangements on the aforementioned were very ably handled respectively by Eichenbarger, alumnus Bill Comstock, and Vince Johnson.

So successful has this pairing been that it was recreated on The Jazz Cruise aboard Holland/America's MS Westerdam in November, 2009, where the trombone section consisted of Whitfield, John Fedchock, Wycliffe Gordon, John Allred, and Jennifer Wharton on bass trombone (Fedchock's wife), and ex-Count Basie drummer Butch Miles was joined by pianist Bill Mays and bassist Lynn Seaton.

Candy; Our Love Is Here to Stay; It's All Right with Me; Angel Eyes; You Stepped Out of a Dream; Early Autumn; Somebody Loves Me; Mam'selle; Love Is Just Around the Corner; Guilty; Speak Low; You Made Me Love You; September Song; Love.

About The Four Freshmen