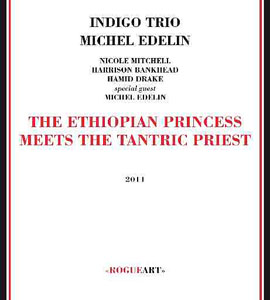 Given the paucity of flute trios in the normal course of events, and the appearance of two almost simultaneously on the same label, it was only a matter of time before the Paris-based Rogue Art imprint brought the two main protagonists together. The Ethiopian Princess Meets The Tantric Priest represents the fruits of the union of AACM flautist Nicole Mitchell and her Indigo Trio, previously heard on Anaya (Rogue Art, 2009), with veteran French flautist Michel Edelin, best portrayed by Kuntu (Rogue Art, 2009).

Mitchell's Indigo Trio comprises master drummer Hamid Drake and bassist Harrison Bankhead, who anchor the daredevil flights of the twin flutists, with a feisty give-and-take which both grooves and goads. While not a cutting contest, and in spite of his rich warm tone, Edelin suffers in comparison to Mitchell. Her inventive narrative, vocal shadings, expressive multiphonics and incisive rhythmic wit create an alchemy few instrumentalists of any stripe can match. In fact, the vocal gymnastics which so enliven Mitchell's playing are relatively restrained here, but nonetheless her exposition at times defies categorization, blurring the distinction between voice and instrument. Both principals contribute to the swinging and tuneful 56-minute program, rounded out by one piece from Bankhead and one group improvisation.

One of the most melodic of bassists, Bankhead's approach carries over into the lush bucolic harmonies of his own restful "Return of the Sun," where he also contributes piano. It goes without saying that Drake propels with his unique combination of easy grace and raw power, bringing infinite variation even to the steadiest pulse. On occasion, he echoes the contours of the bass lines tunefully on his drums, recalling the great Ed Blackwell in his pomp. Drake breaks out his frame drum on the collectively birthed title track. buoying up Edelin's folky skirl. Of the Frenchman's two cuts, "Call Back" is a stalking march, while "Dérives" contrasts a fast tattoo with a slow unison, before opening for freewheeling blowing. Mitchell's "Inside the Earth" features both flutes intertwining a cappella in blues tinged colloquy, but her other contributions are more sprightly and intricate.

Overall it's a captivating and enjoyable listen which strongly begs the question, why aren't flute-led sessions more frequent?

Top Secret; Inside the Earth; Dérives; Wind Current; Call Back; The Ethiopian Princess Meets the Tantric Priest; Ambre Sunset; Return of the Sun.