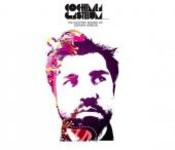 Its title giving a nod to his Native American roots, The Electric Sound of Johnny Arrow is the debut album from Brooklyn-based saxophonist Cochemea Gastelum. A touring member of Sharon Jones & The Dap Kings, and a recurring saxophonist in the original band for the Broadway musical Fela!, Gastelum here pays tribute to some of his soul and Afrobeat heroes—including Fela Anikulapo-Kuti & Afrika 70 baritone player Lekan Animashaun and tenor players Igo Chiko and Christopher Uwaifor, and—above all—electric saxophonist Eddie Harris, an early master of jazz/r&b/soul groove music. Other explicit influences include War and Ethiopian composer/bandleader Mulatu Astatqe. The 10 track album—on which each track comes in, retro style, at about three and half minutes—is one mighty chunk of fun.

On the opener, "Dark City," Gastelum pays his propers to Kuti and Astatqe, both of whom are echoed in the majestic, long-form horn lines which carry the tune. He overdubs tenor and baritone, not to mention flute, organ and percussion, and delivers a steaming solo on the bigger horn. From here on in, the music is more resonant of War, in its throbbing, percussion-rich grooves, and Harris' electric saxophone, which Gastelum plays on six tracks. Tempos are mostly up and solos are mostly hot, but Gastelum also adds cool-breeze flute to a few tunes and there are two dreamy, soulful ballads, "You're So Good To Me" and "No Goodbyes." All the compositions are Gastelum originals or collaborations.

Gastelum could probably have played all the instruments heard here if he chose to—in addition to the aforementioned he also plays Fender Rhodes, clavinet, ARP String Ensemble, alto saxophone, bass clarinet, vibraphone and piano—but he's surrounded himself with a bunch of ace groove adepts including trumpeter Eric Biondo and a rolling cast of guitarists, bass players, percussionists and drummers (including, on "Fathom 5," Joe Russo). His own gutsy bass clarinet puts a nice spin on "Fathom 5," which is otherwise redolent of chill-out scene music from 1970s blaxploitation movies. And still the tributes come. "Impala '73" is heavy boogaloo and "Beijo Do Sol" evokes Hawaiian-tinged exotica.

The Electric Sound of Johnny Arrow benefits from the presence of Adam Dorn (aka Mocean Worker) as producer, who has welded the episodic nature of the program and its diverse cultural references into a seamless whole. Irresistible.

(There aren't, by the way, any accessible video clips out there which reflect Gastelum's music on this album. His MySpace page includes a short clip of him onstage with tenor saxophonist Archie Shepp; which is a groove thing in itself, but Gastelum is heard only in the background and appears onscreen for only a few seconds [far right at around 00:46]. The YouTube clip below is disappointingly one-dimensional when compared with The Electric Sound of Johnny Arrow, but it does convey Gastelum's technical facility on the alto).