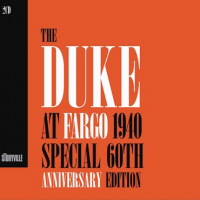 An historic double album, the only one to feature the Duke Ellington band in the greatest of its many incarnations, playing a dance date. It captures the immediacy and chaotic magic of the 1940 orchestra in a way the carefully manicured studio recordings and even radio broadcasts of the time just can't do.

It happened like this: on November 7 1940, after receiving permission from Ellington and the William Morris Agency in New York, Jack Towers and Dick Burris, two young jazz fans from South Dakota ran leads from two microphones they placed on the bandstand of the Crystal Ballroom in Fargo to a portable disk cutter with its own battery supply in the boot of their car, which was parked outside.

It was the night Ray Nance played his first gig with the band, taking over on trumpet from Cootie Williams, who had (in)famously quit to join the Benny Goodman Orchestra. Ben Webster, Johnny Hodges and Barney Bigard were in the saxophone section, the inimitable "Tricky Sam" Nanton was playing trombone and the mighty Jimmy Blanton bass.

Towers and Burris promised Ellington that the records they cut would be purely for their own enjoyment and that's how it stayed until Duke's death in 1974. Then, four years later, they were made commercially available for the first time.

They are now being reissued by Storyville Records, of Copenhagen, and while it's difficult to see how this can be their 60th anniversary as billed, well... who cares?

No use looking for perfection here. That's part of the appeal: the imagination must come into play. A disk runs out before a number ends, there's confusion as the mikes placed by Towers and Burris pick up a radio broadcast being made on the night. Ellington's suave introductions can be hard to hear. So too the vocals by Ivie Anderson and Herb Jeffries.

While these are no great loss, particularly so in the case of Anderson's "Ferryboat Serenade" and Jeffries' "There Shall Be No Night," such schmaltz was an indispensable part of any dance gig. And Towers and Burris captured all the Ellington essentials: what Whitney Balliet called the "punch and persuasiveness" of the ensemble passages; Hodges' soft as silk alto on "Never No Lament (Don't Get Around Much Anymore);" Webster's belligerently confident tenor on "Cotton Tail;" and young Mr. Nance rising nervously to the occasion with his vocal party piece "Wham."

These recordings are indispensable both for all serious Ellington collectors and anyone seeking to understand the history of America's only truly native musical art form.