By Troy Collins
August 4, 2006
Sign in to view read count 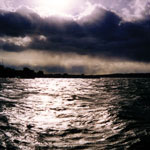 The Dream features the first recorded example of multi-instrumentalist Daniel Carter playing piano. While this revelation is impressive enough, the album itself is a fascinating and endlessly rewarding listen. Ably accompanied by bassist William Parker and drummer Federico Ughi, Carter demonstrates remarkable facility on a half-dozen different instruments in settings ranging from sober to tumultuous.

Opening the album with "This Is the Dream" Carter reveals a piano technique reminiscent of fellow avant gardists Cecil Taylor, Dave Burrell and Don Pullen. His turn at the keyboard emphasizes rousing pointillistic urgency and methodical development. His kinetic, hyper-linear attack is underscored by the rhythm section's relentless, throttling undercurrent.

Equally intriguing is the presence of bassist William Parker playing tuba on a number of tunes. On the blistering "The Truth in the Core," Parker stutters out dense, brassy pedal tones while Ughi whips up a stirring, percussive frenzy. Carter wails away on his brusque tenor, heaving split tones with abandon. "Notorious" features the same instrumentation, this time a sumptuous swinger, with Parker blurting out walking patterns as Ughi provides casual swing that Carter uses to spin melodious variations on his tenor sax. The piece concludes in a genteel conversation between tenor and tuba.

"Life Beyond Death" proves the most unique combination. Carter's pneumatic piano duels with Parker's expressive, breathy tuba. Ughi drives the two with a lumbering, fractious rhythm, intensifying it as the piece progresses until it explodes in a maelstrom of loping, circuitous piano refrains and blustery tuba incantations.

But Parker doesn't abandon his main instrument completely. He generates considerable heat on "The Traditionalist!," a solo exploration of the expressive qualities of the bowed bass. Likewise, Ughi summons an energy level similar to Rashied Ali's infamous performance on Coltrane's Interstellar Space on "6 1/2 Billion." Parker spawns a pulverizing flurry of notes on his upright to keep pace, while Carter spirals out taut alto phrases of biting intensity.

A number of these pieces fade in and out, obviously edited down from longer excursions. The abrupt edits are the only downside to the album, but they indicate that a second volume may not be far behind.

With an exceptionally high level of group interaction and a judicious combination of lengthy improvisations and short interludes, The Dream is a marvelously diverse representation of these three musicians' multifarious talents. This remarkable achievement should be required listening for those in search of inventive free improvisation.

This Is the Dream; Little Did I Know; 6 1/2 Billion; Showering of Gifts; The Truth in the Core; Never Before; Zero Softly; The Traditionalist!; Sea Soul; Spiritual Awakening; Stillness; Notorious; Life Beyond Death; Tempting Faith.