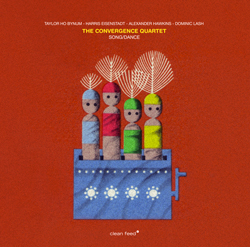 It must have seemed like a long shot when the young British pair of pianist Alexander Hawkins and bassist Dominic Lash invited two illustrious north Americans, cornetist Taylor Ho Bynum and drummer Harris Eisenstadt, to join them for a series of dates back in the fall of 2006. But now after two subsequent tours under the banner of the Convergence Quartet, the foursome is forging its own distinct identity. Its second disc continues the format found on Live In Oxford (FMR, 2007). Each member brings charts to the party which ensures a variety of styles, but common ground comes from a left field take on the interstices between composition and improvisation.

Not only are all four musicians accomplished writers, they are also fearsome improvisors, and the blend makes for a heady brew. Hawkins is carving a name for himself through his own Ensemble and as part of the collective Decoy, whose collaboration with reed player Joe McPhee, Oto (Bo Weavil, 2010), garners critical plaudits. Frequent associate Lash has also lent his far-reaching bass to collectives with saxophonists John Butcher and Tony Bevan and drummer Chris Corsano. Bynum, though strongly associated with reed player Anthony Braxton and the late trumpeter Bill Dixon, has developed an increasingly influential body of work, while Eisenstadt's leadership vehicles stretch from small group intricacy, via explorations of West African rhythms, to soaring orchestral vision.

This repertoire passed muster on tour before being distilled to the essence for the recording. That accounts for the tightness of the tricky charts, but also for the relaxed way in which the band inhabits them with strong solos and well developed arrangements, featuring some haunting melodies alongside the instrumental prowess. There is a lot happening on each cut such that it seems that someone is always improvising, no matter what else is going on.

Eisenstadt doesn't have a conventional feature, but he stretches over the bass riff and understated cornet/piano concord at the conclusion of his own "Next Convergence." Hawkins excels on the same track, spraying notes with his right hand as his left marches up the keyboard before both meet in crashing unison. He shines also on Bynum's "Iris," where his driving rhythmic display appears to have strolled in from a different number entirely, encompassing Thelonious Monk-ish dissonance, stride and two handed counterpoint, bringing proceedings to an unexpected ending. That piece opens with the composer parading the tricks of his trade with slobbering growls, emphatic farts and querulous squeals all fashioned into a marvellously musical introduction. Hawkins' title track showcases duets, with brash cornet partnering an abstract tattoo initially, then notably later where piano and drums provide an insistent backdrop for a chorus of wide ranging arco creaks by Lash and Bynum's whistles and slurs.

There is a staggering range of approaches explored. At one extreme is Lash's austere "Representations 17," which in concert relies on a laptop for some combination of cues, score or instruction, but here manifests as a sequence of disjointed overlapping sounds which come in bursts of activity, and the occasional melodic fragment which isn't sustained, becoming more pronounced in a final off kilter coming together. While at the other is the joyful upbeat South African jazz of "Kudala (Long Ago)" complete with Bynum's playful cornet parachuting in for a goodtime romp. Lash's "Second" makes for a bright opener, with piano and cornet spots gradually stretching the buoyant framework of interweaving lines. Elsewhere "Albert Ayler (his life was too short)" is a gentle processional rendition of the late Leroy Jenkins tune with cornet taking the composer's violin part, while "The Pitts" is a lyrical world weary theme by the drummer with a lilting piano solo. Although the broad sweep might disorientate some listeners, nothing smacks of pastiche, and the varied program coheres around the conviction and skill of the participants. So prolific is the Clean Feed label that some releases are easily overlooked. This shouldn't be one of them.

Second; Next Convergence; Baobabs; Iris; Albert Ayler (his life was too short); Song/Dance (Blues); Representations 17; The Pitts; Kudala (Long Ago).

About The Convergence Quartet