BY KARL ACKERMANN
April 4, 2017
Sign in to view read count 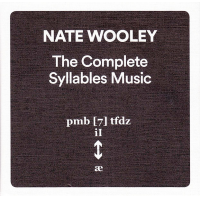 The late Kenneth Gaburo was a noted academic, writer, jazz pianist, electronic music innovator and more. In the 1980s, he headed the Experimental Music Studio at the University of Iowa where he taught that the individual is free to create their own language in terms of their approach to music composition. Gaburo is the inspiration for trumpeter Nate Wooley's latest experimental collection, The Complete Syllables Music.

This ambitious four-disc collection adds to Wooley's revolutionary solo repertoire, which includes Trumpet/Amplifier (Smeraldina-Rima, 2010) and The Almond (Pogus Productions, 2011) and the Peter Evans duo project Polychoral (Mnoád, 2017). This box set includes reissues of two out-of-print works, 8 Syllables (Peira Records, 2013) and 9 Syllables (Mnoád, 2014) and two discs of new material specifically composed as a tribute to Gaburo. The two original "Syllables" discs run just under fifty-minutes each and the Gaburo discs well over an hour each.

Wooley had taken Gaburo's compositional etymology as the foundation for his own approach to "8 Syllables" and "9 Syllables." His distinguishing of one sound from another is manifested on an organic palette where sits the non-conventional physical use of the instrument, breathing techniques, electronics, and even the physical environment where the recordings take place. Wooley's embouchure manipulations create specific articulations, or building blocks for his unique linguistics.

Disc 3's "For Kenneth Gaburo (Part One)" uses direct wording from Gabaro's writing to further the methodology developed in the earlier Wooley works. The sounds derived from the written text are jumping off points rather than literal markers for Wooley; he alternates ranges and manipulates the sound through a discreet use of electronics. Distortion, like a persistent rainfall, blankets the opening moments of "For Kenneth Gaburo (Part Two)" before the enhanced drone of the trumpet appears. The distortion returns intermittently, sometimes alone, other times in conjunction with the brass and electronics, including percussion. The overall effect is a symphonic drone making the final disc the more complexly harmonic of the compositions.

Experimental music—by its nature, or lack of nature—involves a metacognition that makes it incomparable, even in the realm of other similar genre works. Arbitrating its qualities on a moving scale would only diminish the entire process. Much of what happens in listening to The Complete Syllables Music is a matter of individual perception; it is hearing a completely new language and reacting based on varying degrees of openness. That said, it is an incredible collection of work that stands alone in the creative music field. Listen with good headphones and an uncluttered mind and you may experience an alternative aural world.