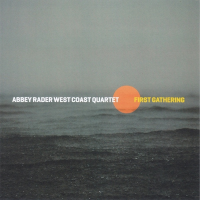 Veteran drummer Abbey Rader's foray to California adds a further chapter to the welcome renaissance of reedman Peter Kuhn. Both men were part of the New York loft jazz scene in the 1970s, but while Kuhn eventually dropped from view in the early '80s, Rader persisted, first moving to Europe, but later returning to Florida where he recorded with saxophonist Dave Liebman, and then spent five years with violinist Billy Bang. Now into his seventies, Rader continues to helm freewheeling small groups, releasing the products on his own imprint.

In these hands the spirit of loft era blowing sessions is alive and well. Rader's stream of percussive rolls, loquacious tattoos and crisp cymbal figures prompts an outpouring of full on free jazz in the classic format of two horns and rhythm. Alongside Kuhn, fellow West Coast reedman Drew Ceccato proves himself similarly fluent in the post-Ayler vocabulary. The restless energy of the two accomplished tenors fuels a four way conversation. With bow in hand bassist Kyle Motl almost steps into the front line, as his wild arco outbursts elicit excitement. As a result he affirms the favorable impression he established on Kuhn's The Other Shore.

Everyone plays a lot in the busy opener "Foreign Dust" which mixes chattering drums, garrulous horns and discursive pizzicato, while the slow purposeful threnody of "Inward Light" stands as more transparent, helped by the leader's pattering and Motl's dirge-like sawing, while Kuhn's bass clarinet shadows Ceccato's tenor. But on the lengthy "Realization To Truth," they take their time and the expansive consequence is all the better for it. Motl's harmonics introduce gentle reed exhalations, before the onset of more typically annunciatory saxophone rhetoric abetted by Rader's choppy cadences, presaging a ruminative finale.