Marc Edwards: The Bowels Of Jupiter 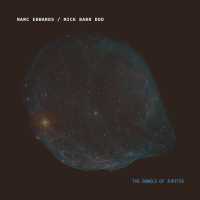 Edwards has long been associated with the free jazz scene (Cecil Taylor Unit, David S. Ware), and Barr has made his reputation playing avant-garde metal guitar in the experimental group Orthrelm.

Both the structured and free-form improvisations on the album are unexpectedly programmatic, although they remain uncompromising and unfiltered. For example, the improvisations on "Molten Lava," "Lighting Strikes," and "Solar Flares" explode across a musical time-space continuum. It's simply hard to imagine that hands and fingers can move that quickly or cover that much territory over lengthy intervals. And the rush feels like being on a bobsled, but not safely tucked inside—instead strapped to the front, racing past icy curves at 80 mph.

Edwards and Barr step off the gas on some of the tunes. Edwards uses various types of percussion and bells on "Inner Space," creating sounds reminiscent of music from a Himalayan monastery. "The Rings of Saturn" has an otherworldly atmosphere too, and "Venus Upper Atmosphere" conjures up clouds and gasses (with gongs and cymbals) while strange guitar utterances mimic racing off in some foggy distance.

"Deep Space African Drums" sounds like a safari in deep space. A hint of Ed Blackwell surfaces in Edward's African beat. And Barr's guitar provides abstract hoots and hollers throughout the tune.

"The Asteroid Belt" gives Edwards and Barr the opportunity to synchronize. The song is a series of running notes that adhere to a straightforward but propulsive rhythm.

The music on The Bowels of Jupiter never simply settles. It's a ride to a place that only you can go. Exhilarating, surreal, atomic, and challenging, this is music that says "Strap yourself in before take off." It is music that boldly goes where no musician has gone before.... Highly recommended.