By JAMES NADAL
May 28, 2016
Sign in to view read count
The experience of spiritual jubilation has taken The Blind Boys of Alabama far and wide from their southern roots. For over seventy years they have maintained their unwavering commitment to only sing in praise and service of the Lord, and they have succeeded on that. They take their role as guardians and bearers of the gospel tradition so serious, that it has been their solitary mission. Having recorded over sixty albums since their beginning as glee club singers at the Alabama Institute for the Negro Blind in 1939, they were awarded back to back Grammys—Best Traditional Soul Gospel Album—in 2001 for Spirit of the Century, and 2002 for Higher Ground, two records that garnered critical acclaim, a worldwide audience, and rejuvenated their career. 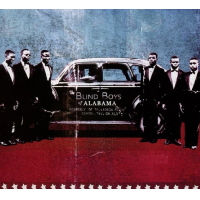 Spirit Of The Century
Omnivore Recordings
2001

The Blind Boys of Alabama on Spirit of the Century consist of founding members Jimmy Carter and George Fountain, in addition to George Scott and Joey Williams. They alternate on lead vocals, sometimes in the same song, and they all do backing vocals and choruses. During the 1990's The Blind Boys had been involved with artists from different genres, within a variety of performance formats, so it was plausible that they would attempt an alternate route in their recordings. With the natural melding of blues, soul and folk into their singular sound, Spirit of the Century presented a simplified method, with a small rhythm section, recorded in a live studio setting. There was no rehearsal or multiple takes.

The song selection meanders a bit, but remains focused on gospel, though not necessarily composed in that vein, as anything The Blind Boys sing is converted into a sacred hymn, no matter where it originated. Tom Waits penned two selections: "Jesus Gonna Be Here," where John Hammond opens with a soulful bass line, and "Way Down In The Hole," a post-modern gospel rumba, augmented by the genial harmonica of Charlie Musselwhite. The Delta blues is explored on "Nobody's Fault But Mine," and "No More," with a stinging slide guitar from David Lindley. "Give A Man A Home," shines a light as to where soul originated, and the re-interpretation of "Amazing Grace," under the chordal structure of "House of the Rising Sun," transforms into a brilliant sacred/secular experiment.

The hard gospel rendition of "Soldier," contrasts with the swinging lamentation of "Motherless Child," an ageless classic which never becomes tedious. The big surprise is "Just Wanna See His Face," from the The Rolling Stones "Exile on Main Street" album. They keep the initial concept but take it into orbit with a rousing call and response, which is their trademark. "The Last Time," also has shades of the Stones, but they rework this as an original, altering the lyrics into a spiritual.

Though The Blind Boys had obvious reservations about straying from their convictions with this project, they managed to stay true to their principles and the songs were given a sanctified baptism. The record was widely accepted, won their first Grammy, and charted their path into the new century. 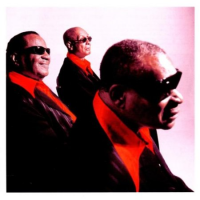 For Higher Ground, The Blind Boys added two new vocalists, Ricky McKinnie (who also plays guitar) and Bobby Butler, and sustained the momentum of their previous success. On that one they brought in the sparse elements of the blues, whereas this time accompanied by the Robert Randolph Family Band, they ventured into R&B, with a double shot of soul.

Commencing with Curtis Mayfield's perennial "People Get Ready," they establish their domain, and do not yield to temptation for the duration. Special guests, Ben Harper on guitar and vocals, and organist John Ginty, enhance this rendition, one of the finest ever. Continuing with the gospel/soul inclination, "Spirit In The Dark," from Aretha Franklin, maintains the pristine course—which does not need any improvement—but by adding the multiple harmony layers, the song takes on a transcendent aura. "Wade In The Water," holds no surprises, for they have covered this on numerous occasions, but is still inspiring. In a more contemporary light, "The Cross," a solemn hymn composed by Prince, takes on a somber posthumous connotation in light of Prince's death.

The inclusion of Robert Randolph, on his pedal steel guitar, offers a distant taste of country to "Many Rivers To Cross," written by reggae singer Jimmy Cliff. Here, The Blind Boys display why they are so adept at genre-crossing, while still singing for the church. The title track is possibly funkier than anything they have done, with organist Ginty joined by Ben Harper on a relentless wah-wah guitar, for the authentic urban backdrop. The original "Freedom Road," is The Blind Boys in their home turf, with high flying gospel choruses delivering a positive sermon.

The chinking guitar scratching of "I May Not Can See," and the deep groove of "You And Your Folks/23rd Psalm," are examples of how R&B and soul can be utilized within a gospel framework and still be effective and tangible. John Ginty provides sole piano accompaniment on "I Shall Not Walk Alone," allowing for the voices to rise to the ceremonious occasion. George Fountain was a founding member of The Blind Boys, and has passed on since the original 2002 recording. His solitary vocal on "Precious Lord," is carried along by Randolph's singular sacred steel, joined by joyous humming of his brethren, as if in a final farewell.

Though they have gained further achievement and recognition since 2002, these records stand as a testament to how The Blind Boys of Alabama were able to reinvent themselves artistically, while remaining true to their righteous intention.

Spirit Of The Century

Tracks: Jesus Gonna Be Here; No More; Run On For A Long Time; Good religion; Give A Man A Home; Amazing grace; Soldier; Nobody's Fault But Mine; Way Down In The Hole; Motherless Child; Just Wanna See His Face; The Last Time.

Tracks: People Get Ready; Spirit In The Dark; Wade In The Water; Stand By Me; The Cross; Many Rivers To Cross; Higher Ground; Freedom Road; I May Not Can See; You And Your Folks/23rd Psalm; I Shall Not Walk Alone; Precious Lord.

About The Blind Boys of Alabama