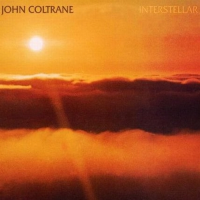 As the '60s dawned it would seem that John Coltrane was determined to permanently turn his back on being an accessible artist. Often considered as one of his most influential works, Interstellar Space is certainly not for everyone. Fans of My Favorite Things and Blue Train may struggle with its seemingly random and "multidirectional" explorations. Also, those who might be expecting this half solar system suite to be based on Gustav Holst's The Planets will be sorely disappointed. Because Coltrane's own compositions are in a complete solar system of their own, perhaps even another universe entirely. If Coltrane ever had Holst in mind, he never talked about it, not even to Rashied Ali, the young drummer Coltrane chose to recruit as a way of expanding his sound, and who would eventually go on to replace Coltrane's other drummer, the inimitable Elvin Jones, who departed due to his own increasing frustration at the saxophonist's new direction.

As Ali himself remembers, "If you listen... you can hear that something's going on and holding the whole thing together. I'm not playing regular time, but the feeling of regular time is there. I'm thinking in time."

First up is "Mars," a composition full of irregular rhythms and Coltrane's own expressionist playing. At over ten minutes, it can make for a fairly intense listen. If one could transcribe Jackson Pollock into music it might possibly resemble something such as this (maybe). "Venus" has a tender beginning before shortly wandering off into an utterly different reality altogether, as if Coltrane were attempting to explain the notions of string theory through his tenor saxophone.

The lesson in particle physics continues with our Professor demonstrating the theoretical framework of the cosmos on "Jupiter," before the listener receives yet another lecture in quantum mechanics with "Saturn." It's all pretty fascinating stuff really, provided one has the intellect to actually understand it.

Originally issued in 1974, some seven years after Coltrane's passing, Impulse! has included two bonus tracks, the seriously feverish "Leo" and "Jupiter Variations." Both the packaging and remastered sound are excellent as always, and if you're really keen, you can wind back from track one to hear several false starts.

In his final years, Coltrane divided both critics and admirers in equal measure. Mad professor, avant-garde prophet, or inspired innovator? Perhaps he was all of these and more. Just as 1959's Giant Steps marked a turning point between his past and what was soon to come, so too could Interstellar Space be regarded as the work of a restless spirit and musical maverick whose concept of cosmic contemplation was often light years ahead of many of his contemporaries.