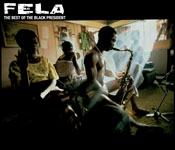 Twelve years after his death, activity around the legacy of Afrobeat originator Fela Kuti is growing exponentially and the US, finally, is getting in on the act. Choreographer Bill T. Jones' musical, Fela, is to open on Broadway on November 23, 2009, and meanwhile New York's Knitting Factory label has begun a reissue program which will, between fall 2009 and the close of 2010, see 45 Kuti titles released.

Jones is a leading light of American modern dance, and brings an appropriate rebel aesthetic to his project, but it remains to be seen how well even he will be able to transfer Kuti's sprawling, multi-faceted life and music to the stage. The Knitting Factory program can, however, be welcomed without hesitation. Its reissue series will mark the first time all Kuti's titles have been released on vinyl in the US—they'll also be available on CD and in a range of online formats—and will include the first official release of the entire catalog of Kuti's 1960s band Koola Lobitos, which began as a highlife and jazz group but which by the end of the decade was playing Afrobeat in everything but name.

The Best Of The Black President is Knitting Factory's opening gambit. The two disc set—the Deluxe Edition also contains a DVD—includes 13 titles made by Kuti, first as Fela Ransome Kuti with Africa 70, then as Fela Anikulapo Kuti with Afrika 70. The same audio compilation has, in fact, been available in Europe, as The Best Of Fela Kuti, on a variety of labels since 2000. Only the packaging has changed, and the handsome Knitting Factory edition includes a solid, broad-brushstrokes Kuti biography by Jacqueline Grandchamp-Thiam.

As with the European editions, eight of the 13 tracks on the audio discs are edited versions of the original West African releases, omitting some of the extended instrumental jams with which Kuti typically began a song. But the compilation is nonetheless a powerful introduction to Kuti's work and includes full-length versions of five important 1970s' titles: "Roforofo Fight," "Lady" and "Shakara" from the first half of the decade, "Zombie" and "Sorrow Tears And Blood" from the second half. The only other caveat concerns the lack of personnel or recording date information. Knitting Factory's individual album reissues will, however, use the original sleeves, most of which include these details.

The DVD is a Knitting Factory initiative and wasn't included with previous releases of the audio discs. It contains excerpts from documentaries and recorded concerts including parts of Music Is The Weapon, Teacher Don't Teach Me Nonsense, Fela At The Berlin Jazz Festival and Fela At Glastonbury Festival. There is also an interview with Carlos Moore, whose Fela, Fela: This Bitch Of A Life (Alison & Busby, 1982), though written long before Kuti's death, remains in 2009 the most insightful published portrayal of Kuti the man.