By David McLean
November 19, 2009
Sign in to view read count 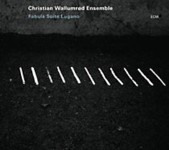 Christian Wallumr&#248d has that rare gift of having an instantly recognizable sound. The pianist's music is characterized by unique blend of early music, romanticism, and traditional Scandinavian folk music idioms played with the looseness of jazz and academic curiosity reminiscent of two of his major influences, John Cage and Morton Feldman. Wallumrød has managed to harmonise these contradictory elements to create a wondrously obscure new music. However, the sound is never dependent on the polarity of these oppositions; its existence and strength lie in the blurring of these lines.

Fabula Suite Lugano is the second outing with the composer's ensemble, following its first release, The Zoo Is Far (ECM, 2007), replete with Baroque harp, Hardinger fiddle, cello, viola, and percussion. All of the previous members of the ensemble have returned except Arve Henriksen, who is adequately replaced by Eivind Lønning; a trumpeter with his own incisive voice. Like its predecessor, Fabula Suite Lugano contains a large program of songs and fragments, creating a varied listening experience. Containing its own distinct textural detail, each track provides examples of all of the composer's influences/concerns in a constantly mutating musical landscape.

"Jumpa" and "Jumpa 2" are smothered in the typical folksiness of Wallumrød's early work, rising and falling with rhythmic string arrangements; luminous shafts of light which create the landscape for Wallumrød's percussive playing. Like night swallowing day, both pieces evaporate it lulling melancholy. And it is this same aching melancholy that is pronounced on "Quote Funebre," a dusty piano dirge that broods and skulks around the tragic drone of the Hardinger fiddle. The fiddle is exchanged for cello on "The Gloom and the Best Man," the strings moaning around the dank warmth of Wallumrød's low caress as the trumpet literally growls and sputters its uncanny tones.

Experiments "Snake" and "Knit" show the ensemble at their disquieting best. Both contain the tension between two competing melodic statements, the parallels revealing something all together new and special. "Knit" especially displays a slow fluctuating divergence of melody and tone. "Duo" contains even more uncanny sounds, the instruments bent unrecognizably to create the voice of some otherworldly beast. On "I Had A Mother Who Could Swim," cello and trumpet are employed with the same supernatural fashion. The combination of these timbres seem to create an unmistakable human voice, emphasizing the mournful quality of the piece.

If all this sounds academic, be assured that Wallumrød's music is full of life and astounding beauty. Although the ensembles music could be accused of being clinical, "Blop" and "Valse Dolcissima" are examples of how this group creates perfect vistas of gorgeous melody. Even at their most experimental, the group's explorations breathe with life, frighteningly mirroring natural ambiences. More manageable than the previous album, Fabula Suite Lugano again clarifies this Norwegian composer's brilliance. His mastery is found in the ingenious juxtaposition of acoustic timbres and in the effectiveness of his confluence of disparate influences. Another entrancing and rewarding entry to this singular composer's canon.