By Edward Blanco
November 20, 2009
Sign in to view read count 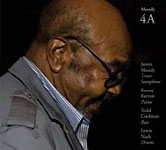 Saxophonist James Moody has been an important fixture in the jazz world since the late 1940s, when he emerged and gained notice as a member of the Dizzy Gillespie Orchestra. Now, a robust 84 years young, Moody offers 4A, the first release from a two-day recording session which took place in July of 2008 with the inevitable 4B to follow. Still going strong, as his sharp solos demonstrate, his suave tenor voice glides over the melodies slightly more gently than in the past, perhaps, but just as gracefully. Along with Moody's long-time bassist Todd Coolman, pianist Kenny Barron and versatile drummer Lewis Nash round out a top notch rhythm section who lend their own appreciable measure of chops to this album.

4A draws on a classic repertoire, visiting time-honored standards including "Without A Song," "Stella By Starlight," and "Bye Bye Blackbird." Moody is especially touching on the ballads, "Round Midnight" and "East of The Sun," where his play is elegant and soulful, while allowing Barron—a long-time collaborator on past projects—to shine a bit with light, delicate piano lines, making these pieces that much more special. With a percussive intro from Nash, the sparkling light bossa of "Stella By Starlight," with energy supplied by the crew, becomes one of the highlights of the album.

The session kicks off with a lengthy ten-and-a-half minute take on the Fain and Webster standard "Secret Love," and moves along to Barron's "Voyage," a bright contemporary jazz number that contains some of the saxophonist's better moments on the instrument. The set closes with Benny Golson's "Stablemates" and a very tasteful rendition of "Bye Bye Blackbird," giving Barron and Coolman a share of the stage as they put together a couple of strong solo performances. A thoroughly enjoyable recording session from James Moody and his fine cadre of "moody men," if 4A is an indication of what 4B may have to offer, this may indeed be "Moody's Finest Effort" as Coolman so boldly states.