Hakon Kornstad / Havard Wiik: The Bad And The Beautiful 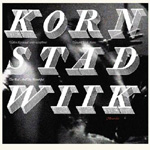 The Bad And The Beautiful marks the second installment of unique, intellectually stimulating and very emotional musical vignettes from saxophonist Håkon Kornstad and pianist Håvard Wiik, after Eight Tunes We Like (Moserobie, 2005).

As was done previously, the tunes range from older and newer standards to intriguing tunes by today's composers, plus a couple of pop tunes that really work. Regardless of their pedigree, each piece has a certain latent possibility buried within it. Kornstad and Wiik's efforts are directed towards exposing the inner workings of these marvelous compositions; saying, in effect, "This is what they are really about."

Eschewing any kind of studio magic, the duo is recorded very dryly, which is heard as an extension of their respective musical personalities. Kornstad uses a thin but focused tone with little airiness or vibrato, and stays mostly in higher range of the tenor saxophone. Wiik's touch is very delicate and spare, leaving lots of space. His playing might be heard as that of a modern Teddy Wilson, whose notes have been described as strings of pearls.

The immediacy and directness of the sound adds to the emotional impact of the album, which accumulates over the course of the tunes. The effect, as on the previous album, is subtle and beautiful, without a hint of the bombastic. They are playing to each other and for themselves, creating an air of intimacy. Thankfully, we get to hear it.

"Embraceable You," by George Gershwin, will most surely be recognized by anyone familiar with the Great American Songbook. The deconstruction of the tune is remarkable and touches on the question every improviser asks: "What is the essence of this tune?" Listening to this track is to understand what the tune is about emotionally as well as musically, as they reference it continually without ever actually playing it.

At the other end of the spectrum is Graham Nash's "Lady Of The Island," one of the high points of the album Crosby, Stills And Nash (Atlantic, 1969). This remarkable composition, that mixes poetry with floating, beautiful harmonies, is also taken apart and presented anew to the listener, who will never hear the original again in the same way. It would not be surprising if this track is picked up by others and the tune becomes a standard.

That the album is named after a David Raksin composition—a writer best known for his film scores, and especially for Laura (1944), the theme of which became a hit with lyrics by Johnny Mercer—is telling. Time literally stops, as Wiik plays the slow arpeggios that announce the gossamer harmonies; the track is five minutes of heaven.

The Bad And The Beautiful rates another heartfelt bravo!

King Korn; Circles; Embraceable You; John S; Bad And The Beautiful; Rousillion; Four In One; Lady Of The Island; Geometry; Law Years; Warszawa.