The Azar Lawrence Experience at Bach Dancing and Dynamite Society 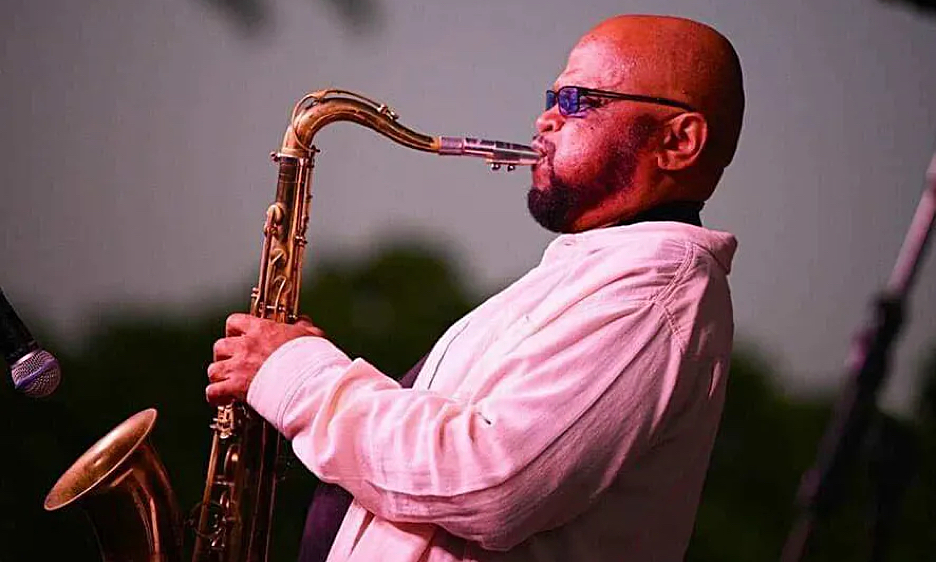 Azar Lawrence's most recent incarnation of The Azar Lawrence Experience brought its energetic presence to grace Half Moon Bay's Bach Dancing and Dynamite Society on July's final afternoon. The "Experience" featured a unique front line consisting of two horns, a guitar, and a vocalist. Somehow, the group's very presence evoked a feeling of freshness and inspiration.

The set opened with "Novo Ano," one of Azar's many originals from his latest album, New Sky. It took off like a three-stage rocket: the first, a singing and swinging forceful head; the second a stellar red-faced, puff-cheeked—à la Dizzy Gillespie—Chris Lowery trumpet solo; and the third, Lynne Fiddmont's exotic and magnetic scat-vocal stylings.

For the second tune, "All in Love," the ensemble produced a veritable and almost overwhelming wall of sound, punctuated by Nigerian conguero and djimbe master Samson Olawale's full-wind-up explosive slaps on conga—he was clearly in a natural state of joy. Drummer Wes Lowery then took over with a creative and exciting solo of his own.

Next was "New Sky," the title tune from Lawrence's recent album. Not enough can be said of this lively artist—his hip, hilarious introductions and comments, and the rich, ruby-bright, and mighty tone he gets from his horns. He has a masterful command of his instruments that wafts sound through the air like sheets flowing in a light breeze. He puts a smile on your face and wonder in your heart. And Fiddmont added a sweet resonance of the great Flora Purim.

"Because of You" followed, featuring an energetic solo by pianist Robert Turner who displayed an aggressive-but-pleasing jack-hammer approach to his instrument. Not only did he rock, but I suspect the piano will need a severe tuning before the next performance.

Dale Williams followed with a soulful guitar solo—Man, can he ever stretch and bend his notes!

After reflecting on the majesty and formidable impact of the great McCoy Tyner, Lawrence launched into Tyner's archly soulful "Walk Spirit, Talk Spirit," which featured fiery solos by most of the band, including an in-the-pocket bass solo by Miguel Alvidrez.

To conclude the proceedings, the duo of Lawrence and Turner played a beautiful rendition of Kurt Weill's "My Ship" leaving all present spellbound in an incredible state of peace.