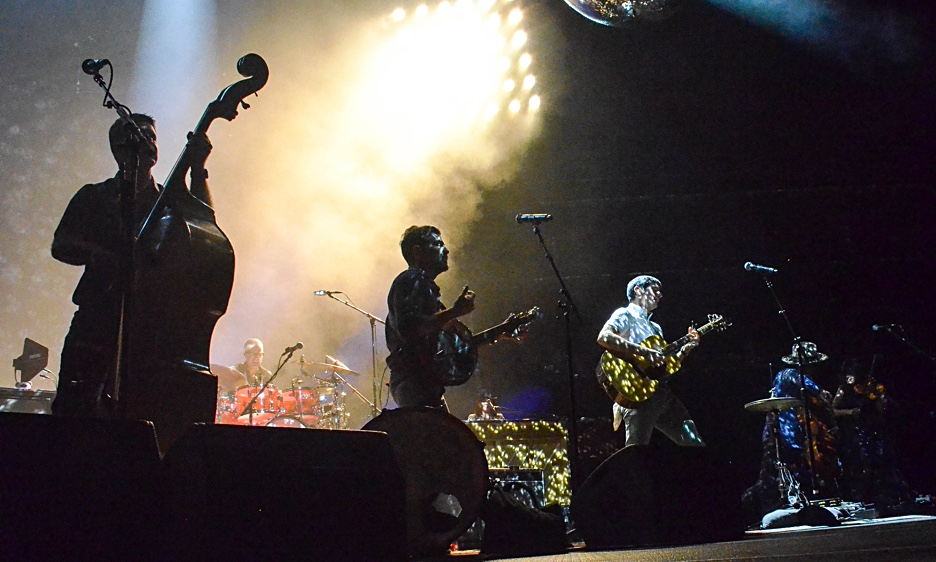 The Avett Brothers' music is best described as a gumbo of Americana featuring a mélange of folk, pop, country and bluegrass with elements of rock and blues and a touch of jazz. Hailing from Mount Pleasant, NC, the Avett Brothers have been nominated for three Academy Awards and eight Americana Music Honors & Awards trophies. It has won four times. Its tenth studio album Closer Than Together (Republic Records) was released on October 4, 2019—the day before this performance. Its previous album, True Sadness (American Recordings, 2016), debuted at number 3 on the Billboard Top 200, topping the U.S. Folk and U.S. Top Rock charts. In addition, the album was nominated for Best Americana Album at the 59th Annual Grammy Awards. The May It Last: A Portrait of the Avett Brothers documentary, about the making of the album, directed by Judd Apatow and Michael Bonfiglio, was released to critical and popular acclaim in 2017. The group is made up of two brothers, Scott Avett (banjo, lead vocals, guitar, piano and kick-drum) and Seth Avett (guitar, lead vocals, piano and hi-hat), Bob Crawford (double bass, electric bass, violin and backing vocals) and Joe Kwon (cello and backing vocals). Mike Marsh (drums) and Tania Elizabeth (violin and backing vocals) are touring members.

Brooklyn, NY-based Lake Street Dive was founded in Boston, MA in 2004. The band was named after a street in Minneapolis, MN that features an inordinate number of dive bars. Featuring Rachael Price (lead vocals), Mike "McDuck" Olson (trumpet, guitar), Bridget Kearney (upright bass), Mike Calabrese (drums) and Akie Bermiss (keyboards), Lake Street Dive's music is a mixture of many different genres (including jazz, soul, pop, rock, country, gospel, blues and swing) and numerous musical influences. Its influences include The Beatles, the Mamas and the Papas, ABBA, Fleetwood Mac, Hall & Oates, the Jackson 5, the Drifters, Steely Dan, Motown and many others. The band's most recent release is Freak Yourself Out (Nonesuch, 2018).

On a cool early October evening the Avett brothers and Lake Street Dive rolled into the Barclay's Center in downtown Brooklyn, NY. The large arena was packed, as virtually every one of its 19,000 seats was sold. The multi-generational crowd was in great spirits as it filtered into the venue. Fans were overheard discussing the Avetts' new release and the borough's adopted local heroes—Lake Street Dive.

Lake Street Dive was up first. The band's short but strong set was, for those unfamiliar with the quartet, a revelation. Though Price was relegated to a throne set at center stage (due to a broken foot she said, "was sustained while dancing around my living room"), the singer and her cohorts delivered a fun and engaging set of powerful music. The band's set was an amazing collection of eclectic and electric originals (highlighted by "Red Light Kisses," "Baby, Don't Leave Me Alone With My Thoughts," "Seventeen" and the set closer "Good Kisser") and two well- chosen covers (Steely Dan's "Dirty Work" and The Staple Singers' "I'm Just Another Soldier").

After a short intermission, the Avett Brothers stormed the stage. Opening with the new tune "High Steppin'" followed by the old favorite "Satan Pulls The Strings," the band was immediately firing on all cylinders and operating as a finely-tuned machine. The fans fed off the killer light show as well as the electricity and excitement generated by the band. The band fed of the cheers, whistles and worship bestowed upon them by the sold-out crowd.

The band's performance was highlighted by the new songs "We Americans" (which discusses the realities of prejudice in the U.S.), "Better Here," "Tell The Truth," and "Who Will I Hold" along with tried and true classics such as "Laundry Room," "Murder In The City" "I And Love And You," "I Wish I Was," a raucous version of "Head Full of Doubt/Road Full of Promise" and "Down With The Shine." The audience jumped to its feet and stayed there throughout the performance which was highlighted by Scott Avett's sojourn into the orchestra pit and through the upper deck during "Ain't No Man." As Seth sang and ran through the crowd, the audience members sang along with him, took pictures of him, cajoled the singer into posing with small groups for selfies and group photos and danced in the aisles.

If the main set was amazing, intense and spot-on, the encores elevated the musicians and the audience into higher level of the stratosphere. The encores were superb versions of the new tune "Bang Bang" (a song that deals with the current climate of excessive gun violence that seems to overtaken the country), "Morning Song" and the beloved "No Hard Feelings."