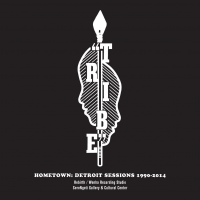 Hot on the heels of Detroit trombonist and co-founder of the Tribe Phil Ranelin's Phil Ranelin Collected 2003—2019 (Wide Hive, 2019), comes another funked up spiritual-jazz beauty from the collective. The music on both albums is about as good as jazz ever gets and, given the social divisions being encouraged by reactionary politicians on both sides of the Atlantic in 2019, both releases are particularly timely.

The Tribe was founded by Ranelin and tenor saxophonist and clarinetist Wendell Harrison in 1972 and was active until 1977. It was one of several African American musicians' self-help initiatives which flourished across the US during the 1970s. In part, these were concerned with professional musicians; in part, they were community programs which offered musical tuition to teenagers from families too poor to afford paid lessons or their own instruments. Chicago's Association for the Advancement of Creative Musicians was a similar initiative and New York's Strata-East another.

All these organisations were active during a period when the US was bitterly divided on racial issues. Their founders were idealistic musicians who were determined to raise their communities up from the economic depression and racial repression from which they were suffering.

One such musician was the tenor saxophonist Idris Ackamoor. In conversation in 2015, Ackamoor explained what motivated professional musicians such as himself to become politically active during the 1970s. "It was about putting community before competition," said Ackamoor. "Previous generations of jazz musicians had been raised like crabs in a bucket. From the 1920s onwards, they were brought up on the idea of the cutting school, where you'd try and best each other in head-to-head jam sessions. 'I'm badder than this cat, I'm badder than that cat.' But my generation felt that the priority had to be unification. Competitive cutting was opposed to unity. It was opposed to 'each one teach one' as the saying went. There was a race war going on in the US. We needed to present a united front." A similar sense of community informs Britain's woke jazz scene in 2019.

Though the Tribe, for non-musical reasons, lost some of its energy around 1977, it never really went away. A few years later Phil Ranelin and Wendell Harrison teamed up with Detroit pianist Harold McKinney to form a second edition, which is the subject of Hometown: Detroit Sessions 1990—2014. Featured personnel include Ranelin and Harrison and another member of the first edition, the late trumpeter Marcus Belgrave, second-edition pianist Pamela Wise, other musicians who have been round the block (Reggie Workman plays on four tracks) and less well known, up-and-coming Detroiters.

The musical aesthetic is little changed: funk-infused spiritual jazz with occasional free-improv breakouts, heavy on bass ostinatos, strong tunes, unfussy but thoughtful arrangements and soulful soloing. The music is mostly instrumental but there is no mistaking its message. Two spoken-word tracks, "Ode To Black Mothers" and "Marcus Garvey," both featuring poet Mbiyu Chui, and "The Slave Ship Enterprise," sung by McKinney, make things clear for the hard of hearing.

The ten tracks on Hometown comprise two led by Ranelin, five led by McKinney and three led by Wise (who comes across, in the best way, a little like Strata-East's Sonelius Smith or the AACM's Amina Claudine Myers). Harrison is heard in all three lineups, and Belgrave and Wise in two of them. The Ranelin and McKinney tracks were recorded live (with great audio) in 1990 and 1995 respectively, and the Wise tracks recorded in the studio in 2014. (Later versions of Ranelin's "Freddie's Groove" and "He's The One We All Knew" are included on Phil Ranelin Collected 2003—2019 and were previously released on his 2003 studio album Inspiration on Wide Hive).

Side A: Wide And Blue; Freddie’s Groove. Side B: Juba; Ode To Black Mothers; Conjure Man. Side C: Libra Ahora; Hometown. Side D: He The One We All Knew; Marcus Garvey; The Slave Ship Enterprise.