Home » Jazz Articles » Jessica Williams: The Art of the Piano

Jessica Williams: The Art of the Piano 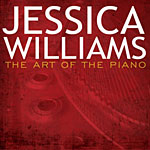 Jessica Williams has been playing piano since she was four years old, and realized early on that she wanted to continue doing so for the rest of her life. Her choice is our reward. The Art of the Piano, a solo piano set, was recorded in May 2009 at the Triple Door in Seattle, WA. The first two numbers, "Triple Door Blues" and "Esperanza," are followed by enthusiastic response, after which the audience inexplicably disappears, returning at the end of track six, "Prophets," then vanishing again before applauding the finale, John Coltrane's "Lonnie's Lament."

Besides composing six of the album's eight numbers, Williams also wrote the liner notes, which are in part a perceptive treatise on pianos and how one should suitably play them. In the concert, she governs by example, using all of the Steinway D to engender and impart her musical vision. That point of view, it must be noted, not only transcends but engulfs improvised music as generally presented; in other words, even though this is a wonderful recital, melodically rich and sonically varied, Williams doesn't improvise in the manner of, say, an Oscar Peterson, McCoy Tyner, Bill Evans or even Keith Jarrett. The music is cerebral, the tempos moderate, the spontaneity intrinsic yet tempered.

Among Williams' compositions, "Triple Door Blues" leans perhaps closest to jazz as we know it. She also wrote "Love and Hate," "Elaine" and "Diane," the last two for close friends. Completing the program is Williams' perceptive restatement of Erik Satie's "First Gymnopedie." Everything is trim and lovely, and played with as much artistry and awareness as could be envisioned. It is what it is, and that may well be enough to please most palates. Bear in mind, though, that it is not the sort of free-wheeling, improvised session that some jazz enthusiasts may espouse. For those who simply love beautiful music, meticulously performed, The Art of the Piano is a luxurious banquet.