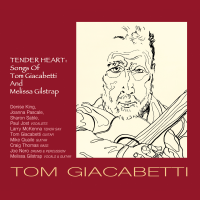 The late Tom Giacabetti was a master guitarist based in Philadelphia and Atlantic City. Towards the end of his life, cut short at age 64 by a prolonged illness, he compiled several of his own compositions for some of which lyrics were set by Melissa Gilstrap, a Philly lawyer and lover of music, poetry, literature, and the arts, who is currently making a name for herself as a jazz lyricist. (Her words are featured in a self- produced 2013 recording From All Sides featuring tenor saxophonist Larry McKenna. Several of her compositions are already circulating among top-flight vocalists like Jackie Ryan.) Over a period of several months in 2015, Giacabetti recorded his compositions, many including lyrics by Gilstrap, with guest vocalists and instrumentalists contributing to the mix. The resulting album displays an outstanding guitarist at his best, thereby providing a beautiful listening experience. Giacabetti worked with many top musicians and singers throughout his career, and one comes away from this recording wishing he made more albums as a leader.

The album, though mainstream in its overall thrust, has a Brazilian emphasis, including a song by Tom Jobim and several of Giacabetti's own Latin-flavored tunes. Gilstrap's lyrics hover somewhere between wistful jazz standards and cultured language, the latter reflecting her interest in poets like Emily Dickinson, Rilke, and T.S. Eliot. Her words are artfully tailored to the music, and her sensitive use of vowel sounds (almost a lost art) allows the singers to achieve fluency and full vocal sonority. The flowing quality of the words and music gives the songs a feeling of familiarity like a jazz standard rather than sounding like a new piece that one must stretch to appreciate. Giacabetti's guitar playing is superb, echoing and matching the likes of Jao Gilberto, Laurindo Almeida, and Herb Ellis. Vocalists Paul Jost, Joanna Pascale, Denise King, and Sharon Sable capture the moods of the songs, while saxophonist McKenna and the rhythm section of Craig Thomas on bass and Joe Nero on drums and percussion provide a perfect foil for Giacabetti and the singers. It's music that haunts the mind as a kind of daydream.

The first track, "Batidinha," a samba by Jobim, sets the Brazilian tone for the entire rccording. Jost offers gentle scatting, with echoes of vocalist J.D. Walter, who in turn was inspired by Brazilian singer Milton Nascimento. Giacabetti's guitar sonorities are lovely, and his arrangement includes a surprising turn at the end that acts as a laconic postscript for Jost.

Giacabetti and Gilstrap's "Fantasy of You and Me in Love" provides a thematic hub around which the other pieces revolve. It is a reflective ballad with Brazilian rhythm, but Gilstrap's simply stated lyrics give it a distinctly American songbook feeling, and for this reviewer it has echoes of the dreamy "Where Flamingos Fly." Pascale's sultry vocal style brings a steamy blues element into a deconstruction of romance as a figment of the imagination. "Gone" is a haunting original Giacabetti and Gilstrap ballad sung by Denise King beginning with her duet with Giacobetti's guitar. At midpoint, a feathery cymbal sound invokes a rhythmic backup, and McKenna's saxophone enters with a letter-perfect Stan Getz-like solo that is a classic example of McKenna's ability to evoke a continuous emotion. With "Missisamba," Giacabetti offers light, upbeat instrumental with his guitar complemented by an evocative rhythm section. "A Meadow Far Away" is sheer poetry, with vocalist Sable invoking Gilstrap's words softly and with story-like innocence. In this duet, Giacabetti produces a variety of beautiful guitar sonorities. His guitar artistry is furthered in "Caitlin's Lullaby," in a reflective "Spanish" style.

The mood changes with the upbeat "Japama," mainstream rather than Brazilian in its rhythmic pulse. There are fine solos by Giacabetti, McKenna, Thomas, and Nero. The track closes with an emphatic unison re-statement of the melody by McKenna and Giacabetti.

"This Too Shall Pass," featuring Denise King in a duet with Giacabetti, expresses in a gentle way the notion of Ecclesiastes that everything passes in its time. It is followed by contrast with the frenetic "Bad Hair Day" with bass and guitar stating the melody in unison. Here, Giacabetti invokes the 1960s style of guitar playing of Jim Hall. Craig Thomas follows suit with a funk blues bass solo, followed by Joe Nero's drum solo capping off the piece.

"Her Spanish Heart" is a guitar solo reminiscent of Rodrigo's Concierto de Arunjez that inspired jazz musicians such as Miles Davis and Chick Corea . Next, the title tune, "Tender Heart," finds Jost singing a lot like Tony Bennett. In this rendition, the song comes across as if it were period piece from an off-Broadway musical such as The Fantasticks. Giacabetti delivers a heartrending guitar solo version of the timeless standard, "When You Wish Upon A Star" in a vein reminiscent of Herb Ellis. Brazilian rhythms return with vocalist Sable backed by the rhythm section in "I Will Always." The album concludes with a guitar duet version of "Like the Sky," with (surprise!) the melody and harmony composed by lyricist Gilstrap, who coincidentally plays the melody in the upper register while Giacabetti fills in the lower register improvisations.

To conclude, Tender Heart is a highly pleasurable musical excursion with exquisite guitar and vocal renditions of beautifully crafted original compositions. It is also an apt memorial to Giacabetti, a masterful guitarist who ought to have been better known and who left us all too soon.