I.P.A.: I Just Did Say Something

BY GLENN ASTARITA
September 27, 2016
Sign in to view read count 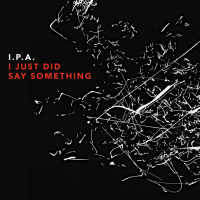 Scandinavians have made an indelible mark on the progressive jazz front for the past several decades. For example, modern era bands such as Atomic and units led by trumpeter Nils Petter Molvær, often present hybrid journeys into free jazz or nu-bop, Avant jazz rock and other shrewdly devised cross-functional endeavors. Since 2007, Norwegian-based I.P.A. has been a major exponent of the fertile Euro jazz scene. Influenced by trumpeter Don Cherry and his lineage to Ornette Coleman's legacy, this unit ups the ante by molding snippets of the past into a mode of attack, blotted by hyper- mode free bop and the frontline's sweltering solos and ricocheting horns arrangements.

From start to finish, the quintet abides by an action-packed gait amid a hodgepodge of stylistic formats, also including a moody cool jazz aura on "Naked O," designed with saxophonist Atle Nymo and trumpeter Magnus Broo's penetrating choruses and contrasted by vibraphonist Mattias Stahl's tender melodic overlays. Hence, it's a group of many colors as they navigate through these works with rebel-rousing but cohesive exchanges and surging through difficult time signatures with the greatest of ease.

The musicians' extraordinary synergy comes at you early on, especially when they add faint inflections, emotive outpourings and other aspects, coupled with their concise sharpshooting tactics and more. On "Globus," pumping horns and a radiantly triumphant theme are offset by brisk and tightly coordinated unison runs, tinted with a rubato sequence and harmonious passages, executed with pinpoint accuracy and accelerated by Stahl's fluid flurries.

Broos lifts a page out of Cherry's book on "Sir William" via his airy, raspy, and expressive start / stop phrasings atop a bop-framed pulse. And "Slakt Sving" is a dynamic free-form romp, spotted with Coleman harmolodic inferences, as the hornists redefine the primary hook atop bassist Ingebrigt Haker Flaten's staggered lines. Interestingly enough, Stahl's twofold performance complements the soloists and the rhythm section, serving as a middle man of sorts. Hence, the album is essentially an explosive, spellbinding, and well-rounded musical event, where many of the hard-edged works encompass eloquent plot developments and tuneful theme-building maneuvers.