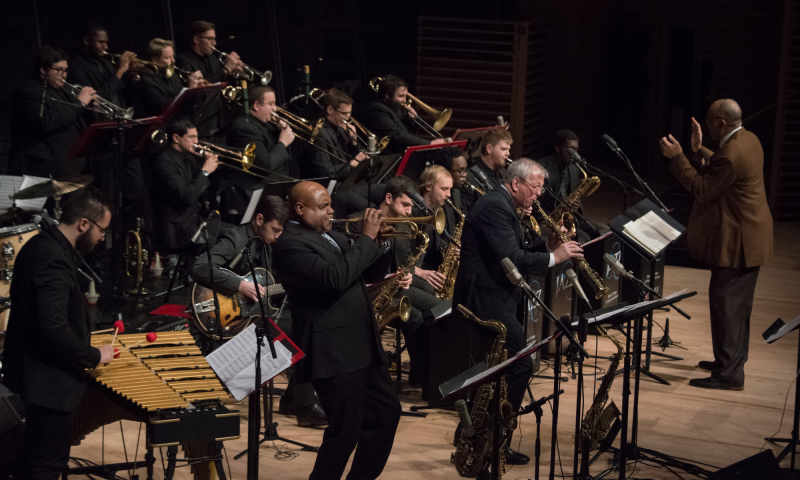 Jazz is an ongoing educational experience, above all teaching that music cannot thrive without love. Not only between musicians and what they play, but also between musicians as they play. I have rarely seen that theory put into such genuine practice as when the Temple University Jazz Band, under the direction of Terell Stafford, filled Jazz at Lincoln Center's Appel Room with some of the brightest young talents I've heard in a long time.

Every imaginable nuance of education was on full display as Stafford and his students—or, as he more accurately put it, "the family behind me"—finessed a multifaceted program. The most obvious variation of this theme was the fact that Stafford is himself an educator. As Temple University's director of jazz studies, he has gathered under his tutelary umbrella an assortment of players whose hearts are superseded only by their collective spirit. Stafford made sure to extend that gratitude both ways, paying tribute as he did to those from whom he has learned so much, and to whom no better gift could be given in return than to share a stage. It was in this mood that he welcomed the father of jazz education, Jimmy Heath, to join them. Whether patiently unpacking the finer implications of "'Round Midnight" or swimming in the larger lake of his original "Gingerbread Boy," the 91-year-old saxophonist and composer took everything in stride. The latter tune threw spotlight on guest trumpeter Jon Faddis, whose characteristic squeals poured gasoline into the fires of inspiration already blazing around him. At the core of that rendition was Stafford's own quintet, rounded out by pianist Bruce Barth, bassist David Wong, saxophonist Tim Warfield, and drummer Rodney Green. The same quintet breezed through its leader's own "Bounced," a highlight of the evening for Warfield's robust yet fluid chromatism, and for showing Stafford to be a master trumpeter, possessed of clarion highs and unmistakable fortitude. Stafford likewise shined in "Deep Valley Swing," the second of two tunes written by bassist John Clayton in honor of the great Thad Jones. The first of these, "Just You," boasted the optimism of saxophonist Dick Oatts, whose dynamic tone could draw water from even the driest well.

Clayton's arco rendition of "Emily" was another moment to remember. Accompanied by pianist Keith Chasin and trailed by soft pulses from the band, Clayton beguiled with his sensitive approach. And when he passed a note to altoist Christian Lewis, who unraveled from it an artful solo before passing it back in kind, I knew that every inner circuit of this performance had been carefully wired and nourished with creative electricity. Lewis, for his part, was a talented soloist among a band comprised of nothing but. He had the first lick of the night in the concert's opener, "Sweet Georgia Upside Down," which found the entire band swinging hard yet with cushioned steps. Every member was vital to the overall sound (especially the mind-melded brass section), making it difficult to pick out individuals without risking neglecting others, but of particular note were drummers Donovan Pope and Ben Singer, vibraphonist Ethan Fisher, baritone saxophonist Josh Lee, and guitarist Benjamin Turner, all of whom grabbed a piece of the action in the showcase pieces like "Fingers" (by Thad Jones).

The evening further sported two guest vocalists. First was Naomi Myers, whose flawless intonation coated "Between the Devil and the Deep Blue Sea" and "The Very Thought of You" with warmth and incense, while the incomparable René Marie brought her soulful, embodied delivery to bear on the tongue-in-cheek "I Want to Be Evil" and the timeless ballad "Lover Man (Oh, Where Can You Be?)."

By far the most powerful guest was saxophonist Joe Lovano, whose tenor exposed untold sinews within the musculature of "The Interloper" (also by Jones) and "Body and Soul." Throughout both, the young reedmen in the front row could only smile and nod in awe as Lovano pulled these classic tunes through his rhythmically astute and narratively sound filter. More importantly, he threw that respect back in spades, thus acknowledging the band's ability to adapt to any terrain.

All the more fitting, then, that they should be playing against the backdrop of West 59th Street, seen pulsing through the Appel Room's panoramic window throughout. Watching cars come and go in either direction was a sobering reminder that two-way communication is what makes the world spin, and that jazz is nothing if not reciprocal.