By Dan Bilawsky
September 26, 2012
Sign in to view read count 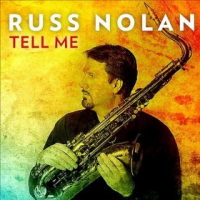 While saxophonist Russ Nolan's move from Chicago to New York in 2002 was an important turning point in his career, his subsequent immersion in the New York Salsa dancing world has had an even greater impact on his music. Nolan learned to free his body and his mind to the effects of the rhythms as they washed over his very being, and he's allowed this same mindset to seep into his music.

Tell Me is all about the Latin groove lexicon, Nolan's musical influences, and the saxophonist's compositional and arranging skills, which seamlessly merge the two. Nolan is an authenticity man, unwilling to make himself a Latin pretender by simply putting a syncopated cymbal bell pattern behind a song, but he also believes in innovation and cross-pollination in terms of rhythm, harmony and form. He covers his Latin ABC's with Afro-Cuban grooves ("Beyond Arbitrary" and "Stolen Moments"), Baião ("No Secrets") and odd-metered bolero (""View From The Bridge") underpinnings, but he also allows the music to organically shift from Latin to swing ("Creepin'") or work a straight-eighth line ("Man In The Mirror").

The record opens with a number that's coated with an earthy and funky post-modern fusion patina ("Tell Me"), thanks in large part to Art Hirahara's Fender Rhodes, but Nolan quickly moves elsewhere. Bubbly grooves, probing solos and twists on classics make for an interesting ride as the program develops. Arranger/saxophonist Oliver Nelson's most famous tune ("Stolen Moments") is reborn with an Afro-Cuban foundation, The Beatles are refashioned to Nolan's liking ("Nowhere Man") and bassist Jaco Pastorius' "Three Views Of A Secret" serves as grist for the mill on two Nolan numbers ("No Secrets" and "View From The Bridge"). Each of these pieces gives pause to admire Nolan's creativity in construction, but the pièce de résistance may be his take on Weather Report keyboardist Joe Zawinul's "A Remark You Made," reborn here as a sunny and rhythmically vibrant number full of energy and passion, where fun and genuine feeling reign supreme.

Nolan's tenor is full-bodied, but always even-keeled and devoid of any edge. While this can occasionally leave the ears wanting for a bit more abandon or ecstasy, Nolan still holds interest through his ideas and phrasing. Hirahara's willingness to mix sophisticated notions with throw-caution-to-the-wind ideas makes him a pianist to watch throughout the program, while drummer Brian Fishler deserves kudos for powering the ensemble through each piece, his over-a-vamp solos also proving to be a treat.

While making a name for yourself as a saxophonist on the New York jazz scene is no easy feat, Nolan has what it takes to compete with the best of them and he lays it all out on Tell Me.

Tell Me; Stolen Moments; Nowhere Man; Beyond Arbitrary; Creepin'; A Remark You Made; View From The Bridge; Man In The Mirror; No Secrets.