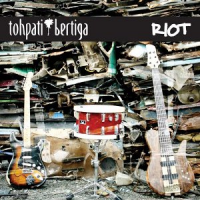 Indonesian guitarist Tohpati Bertiga spews lightning strikes across the studio, enamored by his slick-picking breakouts and shrewd use of space. He's a seasoned vet, noted by his prominent session duties and affiliation with the ultra-progressive jazz-rock band simakDialog.

This energized trio date broadcasts a spirited kinship that translates to disc in exuberant fashion. A multifaceted mix, the artists gel with a conglomerate of funk, progressive-rock and groove-centric workouts, highlighted by the leader's technical wizardry and impassioned mode of attack.

The trio cuts to the chase on "Middle East." Here, the guitarist dishes out an indigenous and fluently executed Middle Eastern folk vamp, contrasted with edgy distortion-tinged chord clusters atop a pulsating cadence. Tohpati dances around the primary theme during the bridge and highlights his jazz improvisation skills, woven into more of a prog rock vibe.

With torrid note-bending intervals, Tohpati rockets into hyperspace via scathing single-note lines. The trio revisits the primary theme for the finale, culminating into a persuasive East-meets-West musical forum, where finesse, firepower and art reveal a congruous soundstage.