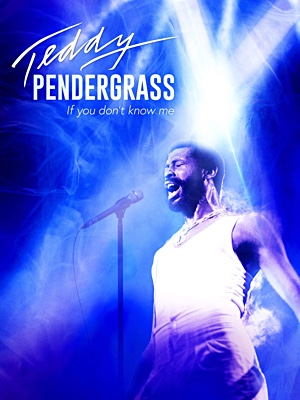 "The Love I Lost," "I Miss You," "If You Don't Know Me By Now," "Bad Luck" and "Wake Up." These are all unforgettable hits by Harold Melvin & the Blue Notes. The group epitomized the string-drenched, symphonic soul sound of Kenneth Gamble & Leon Huff's Philadelphia International Records (PIR) that became the predecessor of disco. However, the voice who carried all the hits was not Harold Melvin, but Teddy Pendergrass (1950-2010), one of the great soul singers of the 20th century. His remarkable story is told in Olivia Lichtenstein's feature-length documentary Teddy Pendergrass -If You Don't Know Me.

The documentary covers the time before and after the crucial turning point in Pendergrass' life when he had a car accident in March 1982 that left him paralyzed from the chest down. At that time, he was only 31 years old, but he was already an established star and on the verge of becoming a superstar. It had not been an easy journey. The documentary tells about his upbringing in a tough neighborhood where he was taught to be a survivor. His father left him, but his mother was there for him and she also participates in the documentary, which also includes his wife, children, manager, bandmembers and not least Pendergrass' own voice heard through an extensive audio-biography that he recorded.

Fame also had a price. The music business of the '70s was tough and he both fought against mafia violence and police harassment. Being a black entertainer with success was not easy. Nevertheless, Pendergrass always had the will to make it. He did not accept being left in the shadow when he played with Harold Melvin & the Blue Notes and started a successful solo career that took him all the way to the top, and when everything seemed impossible after the car crash, he fought back after a period of despair. He found a new home on Asylum Records and began recording again. He also made it to the stage. One of the most touching moments in the documentary is when he sings "Reach Out and Touch" at Live Aid 1985 in Philadelphia.

Using varied sources and a secure sense of composition, Olivia Lichtenstein has made a documentary that is both a biography, social history and an inspirational tale of survival. Lichtenstein has not made a hagiography. Pendergrass comes across as a complex human-being with both good and bad sides, but most of all as a person with a lot of heart. Through it all, he sang from his soul with a feeling of urgency and intimacy. He revealed something about himself in his music and this beautiful documentary adds another layer to his story.