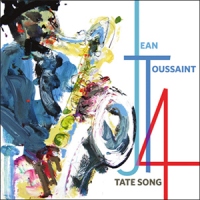 Ten albums in twenty five years isn't prolific but in a world awash with inferior music saxophonist Jean Toussaint's unhurried approach has consistently produced high-quality recordings that stand the test of time. What's more, the lapses between releases make each production a bona fide event. Certainly, the four years since his live album and the nine since his previous studio effort, Continuum Act One (Space Time, 2005) have created an expectation around Tate Song, and true to form, Toussaint delivers the goods with seemingly effortless joie de vivre.

Five Toussaint originals, two more from pianist Andrew McCormack, and attractive arrangements of "These Foolish Things" and Milton Nascimento's "Vera Cruz" make for a contemporary set that nevertheless draws from the saxophonist's abiding influences—jazz's great modernists of earlier generations. Toussaint's keen melodic sensibility is matched by the rhythmic elasticity of one of the UK's best rhythm sections in McCormack, drummer Troy Miller and bassist Larry Bartley and the resulting chemistry produces a sumptuous feast of straight ahead jazz rooted in the hard bop/bebop traditions yet one that sounds utterly fresh.

Toussaint's compositions harbor strong melodic motifs, which serve as launching pads for improvisation and navigational signposts, for even in the thick of solo free-flight the defining melodies are bared aloft like torches illuminating the path. Within that framework the quartet freely juggles the rhythms, particularly on the surging hard-bop of "Mood Mode" and the powerfully emotive "Mulgrew"—Toussaint's slow-burning, sometimes volatile tribute to the late pianist Mulgrew Miller, former co-collaborator in drummer Art Blakey's The Jazz Messengers. Bartley anchors the quartet while Miller flits between in-the-pocket groves and bolder extemporizations of notable breadth.

The title of the gently swinging ballad "My Dear Ruby" alludes to pianist Thelonious Monk's "Ruby My Dear," but in fact there's more of Monk's shadow over the main motif of the propulsive, solos-driven "Rice (For CR Peppers)." The ballad "Tate Song" reveals the imprint of two other important influences on Toussaint; there's the hand of saxophonist Wayne Shorter in Toussaint's languid melodies and that of saxophonist John Coltrane in the tune's elegiac ending. This gorgeous composition sounds like the love-child of Shorter's "Infant Eyes" and Coltrane's "Naima."

In fifty years, when much of today's popular music has been forgotten by history or confined to nostalgia, Tate Song will likely have lost none of its power. It's a classy testament to the enduring appeal and romance of jazz, and to Toussaint as one of its modern standard bearers.