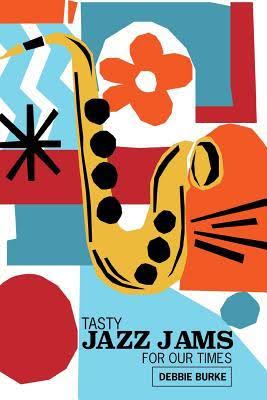 Tasty Jazz Jams For Our Times represents a kind of broad, sprawling, inconclusive entry into various aspects of the present state of jazz. While we're accustomed to weighing perspectives on the history of America's original art form by all manner of scholars and scribes, for a number of reasons a comprehensive view of the present day is comparatively difficult to pin down. The music is now populated by innumerable offshoots informed by cultures the world over; the sounds resist definition (or, at least not amenable to catch phrases); and the role of gatekeepers from the media and the record business is much less significant then in the mid-to-late twentieth century.

In compiling forty-six interviews of jazz musicians of all stripes, Debbie Burke wisely opts for a big tent approach that enables the artists to speak for themselves. (Kudos to Burke for including a couple of interviews in which the subjects offer rather perfunctory, half-hearted responses.) She avoids advocating rigid stylistic preferences and doesn't attempt to steer the reader into any point of view or specific take on the music. It's apparent that Burke's having too much fun picking the brains and capturing the experiences of her subjects to draw any hasty conclusions as to what it all means. The book isn't meant to be a definitive statement of any kind; nor is it an attempt to fashion the sounds and attitudes into a coherent, harmonious whole.

Burke doesn't assume the identity of an expert, critic, or insider; instead, she gets a lot of mileage out of evincing a genuine interest in the music and the activities of the people who make it. As an interviewer, she strikes a balance between inquiries about her subjects' current projects, their backgrounds, the formal and informal aspects of their jazz education, and their aspirations. Although a handful of questions are frequently employed, Burke pretty much tailors queries to each individual, and she usually displays a fundamentally sound knowledge of their music without taking deep dives into issues related to theory. She asks about musicians' challenges as well as triumphs, and is curious about how they function in an age when getting gigs, the financing and technical aspects of recording, as well as finding ways of promoting one's career are all essential parts of an artist's skill set. Some of the most engaging chapters concern musicians who play instruments not commonly employed in jazz—harp (Stina Hellberg Agback); EVI (James Barela); bass clarinet and contra-bass clarinet (Paul Austerlitz); Chapman Stick (Dave Brosky); and French Horn (Bob Watt).

Burke's choice of interview subjects spans the globe and isn't restricted to musicians who reside in major jazz centers. She gives voice to many musicians and singers who mix and match a wide variety of popular, jazz, Latin, classical, and world music influences and wouldn't dream of conforming to any recognizable style, as well as those who identify with smooth jazz or selections from the Great American Songbook. Burke also displays a healthy curiosity about the vitality of individual jazz scenes around the world, particularly in areas not necessarily known for supporting jazz and improvised music.

Saxophonist Andy Snitzer offers a comment that inadvertently looms large over the whole book, especially in regard to those who are new to jazz and attempting to break its code. "To a large extent it's a learned language, more so than pop music; not that that makes it any more powerful or important. It just means people can't immediately digest it, they have to try it for awhile to start to understand the language." (p. 361)

While it may seem counterintuitive to point readers in the direction of a book that shows little concern for the storied past and doesn't make prophetic clams about the future, Tasty Jazz Jams For Our Times is recommended as a unique introduction to the music and the concerns of a wide spectrum of today's jazz musicians. Novice listeners will discover a world that contains few aesthetic boundaries, and be exposed to the thoughts of artists who are concerned with self-expression and actively engaging with audiences.