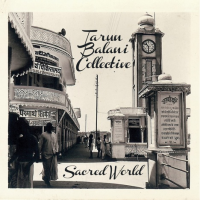 Jazz fans of a certain age were most likely introduced to the world of Indian music via the recordings of John McLaughlin who, with the group Shakti, introduced American listeners to the dazzling virtuosity of musicians such as violinist Lakshminarayana Shankar, and percussionist Zakir Hussain. Shakti's music extended the compositional style that characterized his previous group, the Mahavishnu Orchestra. Ultra-fast tempos, and dizzying, rapid-fire unisons were thrown around with abandon, and odd rhythmic groupings were the norm. McLaughlin continues to work with a number of Indian musicians, all of whom are able to play in this lightning-fast style. So, it can be a bit of a surprise when one experiences the more meditative and inward-looking side of Indian music in a jazz context, even if one already knows that Indian music is as many-faceted as American music.

Percussionist / composer, and New Delhi resident Tarun Balani offers up a completely different vision of Indian music, yet one that- like McLaughlin's-is framed in a context that's largely jazz-oriented. On his debut album, Balani-uncharacteristically for a drummer- concentrates on ballad-like tempos and the use of drums and percussion as atmospheric devices. The title track provides a lovely example; featuring brother Aditya Balani on acoustic guitar, the piece slowly eases forward with pianist Sharik Hasan joining Aditya in the front line and veteran bassist Bruno Raberg providing the necessary rhythmic pulse. Tarun hangs back, literally comping like a pianist with strategically malleted cymbals and toms, switching to brushes for Raberg's meditative solo. He stays with mallets throughout his stormy, rhythmically amorphous opening solo on "Varsha," easing into tempo behind the piece's insistent repeated piano figure as Suhail Yusuf Khan plays the theme on the sarangi, a traditional South Indian stringed instrument that can be plucked or played with a bow.

Obviously a master colorist, the 20-something drummer also shows that can stir the pot as ferociously as anyone else on Sacred World's more up-tempo pieces. Both "Arjuna" and "Arjuna Reprise" (actually quite dissimilar despite their titles) feature Tarun's taut and nimble stickwork, and showcase the Berklee grad's individualistic approach to rhythmic phrasing. In particular, his playing on "Arjuna" quirkily de-emphasizes the backbeat, but gives the tune a sprightly off-kilter energy. His approach on "Arjuna Reprise," while a bit more conventional, is no less fresh. "Pictures" opens with Raberg's resonant bass and has a mellow-yet-melancholy ECM-like vibe. Here, and throughout the album, guitarist Aditya is the primary soloist. He's an exceptionally gifted player in the early 21st century jazz guitar mold-similar in sound and approach to Kurt Rosenwinkel. Pianist Hasan is cut from similar cloth; eschewing speedy runs and pounding chords in favor of a flowing, melodic single-line approach. Raberg is a real asset here; he works well with the young drummer, gets numerous improvisational opportunities and he vibes with Tarun's compositions on a profound level. The wild card here is vocalist and sarangi-player Khan. His vocals on "Azaan" are straight out of the Indian classical tradition, but work beautifully with Tarun's slow-paced, jazz-based composition. He's a very mobile and creative improvisor who seems completely at home in the rhythmic / harmonic world of jazz.

A truly lovely album of flowing, meditative jazz with a distinct Indian flavor, Sacred World is an auspicious debut release for Tarun Balani and his top-notch band. The overall effect of this music is similar to the last few ECM releases by the Pat Metheny, or perhaps some of Brian Blade's albums with his group, Fellowship. Like fellow drummer Blade, Tarun's understated yet buoyant drumming and imaginative compositions are nothing short of remarkable.