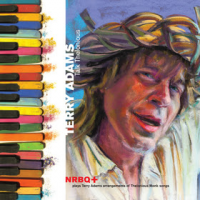 Musician and AAJ contributor Skip Heller calls the New Rhythm and Blues Quartet (NRBQ), "the greatest band of all time." A listen to the band's catalog reveals a depth and breadth of material that betrays an omnivorous appreciation of all American Music, all with a wicked and acute sense-of-humor, something so much music lacks. Never a stadium act, NRBQ has staked out for the past 50 years the responsibility of cataloguing, performing, combining, transmogrifying, and nuclear translating our native brands of music. Founded in 1967 by multi-instrumentalist Terry Adams, the band had its most stable and notable line-up between 1974 and 1994, including bassist Joey Spampinato, guitarist Al Anderson, and drummer Tom Ardolino. Today, Adams is the only remaining member of the original group.

Adams, who was born in the Baby Boom of 1948, stretches his arms out and embraces much of the past, which he translated into the present, and anticipated the future. When Adams came to New York City in 1967, during the NRBQ formation, he had the opportunity to attend many Thelonious Monk performances. So many, in fact, that Monk's close friend and benefactor Baroness Pannonica de Koenigarter noticed and befriended him remaining his friend until her death in 1988. The idea of a Monk disc has been percolating since...for nearly 50 years. Together with the current incarnation of the NRBQ, Adams combines musicians and instruments, rhythms and tempi not typically associated with Monk, bringing us to the second and third elements of a five-star disc, repertoire and interpretation.

Monk's music is so identifiable and iconoclastic of bristling creativity that he inhabits a category unto himself. Christened the "High Priest of Bebop," it was neither his chops nor his compositions that made him "bebop.' It was his visionary spirit. He just happened to be making his music at the same time Charlie Parker and Dizzy Gillespie were changing American Music from the ground up. While he performed with the bebop leaders of the day, Monk himself was redefining jazz in a whole new way, one that made his music sound foreign but exhilarating.

A major pitfall to Monk's repertoire is how much it has been stepped on, by other musicians and himself, since the notes transferred from his fingers to the piano. So we need one more performance of "'Round Midnight?" Well, it would have to be original and novel. And, gratefully, Adams leaves that one alone, concentrating on the lesser known compositions to give a wide variety of attention to. That attention is the fourth necessary element to a five-start recording, the invention with which the performing artist transforms the familiar into something else.

Which is exactly what Adams does in this (mostly) live performance recorded at the Flynn Space, Burlington, VT, on April 5, 2012. He opens the recital with Monk's "Reflections," played on the pipe organ. The pipe organ...nothing as vulgar as the Hammond B-3 (not that there is anything wrong with the Hammond... Adams' invention here is inspired and sheer genius). This is Monk somewhere between church and the 1950s soundtrack of The Edge of Night. Adams retains and accentuates Monkian quirks and burps with a certain sly reverence. Adams strolls through three choruses of the piece on the organ before switching to the standard piano trio to show approximately the song was supposed to sound like. The "wow" factor is eleven on a scale of ten.

"Hornin' In" begins like a Monk piece and transforms into a rockabilly-western swing exposition of Monk as heard through a glass of absinthe. Scott Ligon's guitar is hard country swing, jangly and twangy and Jim Hoke's alto is potent and boozy. The first stand out is "In Walked Bud," Monk's homage to colleague and pal, Bud Powell. Again, Adams starts straight, if not a bit stilted before relaxing into a walking bass pattern. Again Ligon recasts the piece with an electric guitar sound from somewhere between 1940 and far-west Texas. Hoke solos on alto and is doubled by Klem Klimek's tenor saxophone. Adams give a high-school styled piano solo that is if you went the UC Berkeley for high school. Adams trade notes with Hoke in the improvised exposition before Ligon enters to bring on the coda with just enough tremolo to recall Hank Williams, Sr. Invention, see what I mean?

"Monk's Mood" is provided a lengthy solo piano introduction before Hoke doubles on the harmonica and pedal steel guitar to produce one of the most singular and original Monk performances since Monk himself. The NRBQ mantra exists throughout the performance...take a well-known piece of music (like Glenn Miller's "In The Mood") and demonstrate how the piece is so durable that it can be played in any fashion and still retain its original spiritual intent. "That Old Man" is played like the nursery rhyme it is, Adams performing is greatest Vince Guaraldi on the piece. If the Charlie Brown franchise is ever updated, I want Adams in charge of the sound track.

"Humph." Think of what would happen if Roy Clark or Jerry Reed got a jazz jones and just had to have that itch scratched. That is what Ligon sounds like after the swing vampire bites him. "Think of One," one of the better known Monk compositions, is performed from within a New Orleans Big Band transplanted to the Gulf of Mexico Islands is what approaches a rumba. Klimek walks the R&B bar honking on the tenor before allowing Hoke his John Coltrane turn. Outstanding is drummer Conrad Choucroun with supporting percussion by Ligon- -music as sweet and dangerous as rum on the coast of some humid nowhere. "Ask Me Now" is a keyboard duet with Adams playing piano and Ligon playing the B 3. The original stride piece, as conceived by Monk, is given a strange and sacred patina in the form of the craziest keyboards-four-hands one could imagine. Think of Oscar Peterson and Count Basie enjoying a leisurely afternoon in that dive Billy Strayhorn imagined in "Lush Life."

"Ugly Beauty," "Gallop's Gallop" and "Straight, No Chaser" make an appropriate encore for this concert, 50-years in the making. "Gallop" is the jazziest piece here with Ligon and Adams going "off minor" and held in bay by bassist Pete Toigo and drummer Choucroun, who says more with his high hat than most drummers do this nuclear kits. "Straight, No Chaser" is the quintessential Monk blues. Adams imagines a Leon Russell playing with Don Helms at a Dallas honky tonk frequented by Eldon Shamblin, who sits in with the band. A beautiful (and studio recorded) "Ruby, My Dear" concludes the program on a quiet note.

It is a rare creative triple point that brings together the proper music, repertoire, and imagination necessary to make an outstanding recording. After 50 years of thinking about it, Terry Adams has done exactly that. Thank you, Terry Adams.