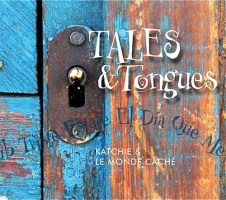 Vocalist Katharine "Katchie" Cartwright is certainly one extremely talented individual. A Ph. D. in ethnomusicology provides a clue of her caliber on Tales & Tongues. An educator, professional singer and musician, her experience with workshops throughout Europe, South America, the Caribbean, Asia and West Africa, has prepared her well for this particular project, where Cartwright—along with her group Le Monde Caché ("the hidden world")—presents a collection of standards from the world stage, using music from what she terms, the "global songbook." Possessed of a velvet voice, Cartwright draws on her worldly background to sing ten songs in French, Portuguese, Spanish, Italian, Yiddish and Ladino.

Besides her gift for song, Cartwright compliments her singing by playing a mean flute.This is the latest joint project with husband/alto saxophonist Richard Oppenheim, with whom Cartwright has performed and recorded since 1980. The song selection is uncommon: there are some familiar standards, like Antonio Carlos Jobim's vibrant "Triste" and "Chega de Saudade," both sung in Portuguese; but the Yiddish "Bay Mir Bitsu Sheyn," and "Ikh Hob Dikh Tsufil Lib," and Ladino "Alta Va La Luna," represent some of Cartwright's more unusual choices.