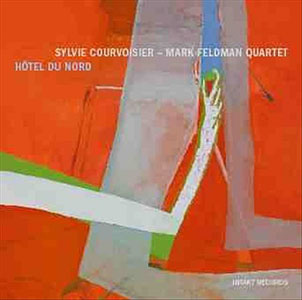 Hotel Du Nord is shot through with heightened sensitivity. In the wake of To Fly To Steal (Intakt, 2010), the group did a series of European tours and this experience of playing together has resulted in heightened musical understanding.

The quartet's musical currency—with the original lineup intact—is as informed by Twentieth Century chamber music as it is by creative improvised music, which means their work is about deft strokes as much as rhetorical flourishes. Pianist Sylvie Courvoisier's "December 2010" highlights this for all of her co-leader's heat. The compositional framework incorporates plenty of space, and all four members make the most of it. Drummer Gerry Hemingway is a master craftsman in the art of working with a group, while bassist Thomas Morgan's economy has the effect of making the ear yearn for what he's going to play next.

The slightly unsettling piano motif which is a recurrent factor in violinist Mark Feldman's "Plan A" renders his work positively unearthly. However, that impression is counteracted by Morgan, whose work is both exploratory and the sun around which the other players seem to orbit. In the suspension of momentum, a point made stark by Hemingway's skittering brushes, the tension builds as a consequence of players falling silent. When Hemingway solos it's with a singular lightness of touch, whilst Feldman's solo is as close to trenchant as anything this group produces.

"Inceptions" is a stark example of where the group's currently at. Courvoisier goes under the piano lid to supplement the sonic palette, and utilizes a low area of the keyboard for further emphasis, while Feldman's sly yet tonally true lines have the perhaps unsurprising effect of counterbalancing Morgan's work. Hemingway's playing is of an order which suggests this is molecular music—or at least it would if it wasn't for the fact that this is a group which always has a firm collective identity.