BY GLENN ASTARITA
October 10, 2012
Sign in to view read count
Track review of "In Between Chairs (for Roswell Rudd)" 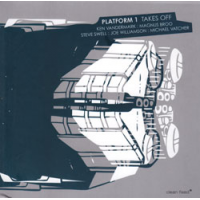 The debut recording by Platform 1 comprises a multinational cast of progressive jazz musicians who easily knock it out of the park with blazing free-bop motifs, introspective sojourns, shuffling jazz-boogie vamps and celebratory interactions. Add the often feverish solo spots and tumultuous climaxes into the mix to round out a divergent program, culminating in a highly imaginative set of structured song forms, subdivided with ample portions of improvisation.

The quintet fuses a semi-controlled jazz vibe with enticing diversions, but seldom abandons the primary thematic foundation, often steeped on bubbly rhythmic sequences and circuitous routes. There is much to digest, yet the shrewdly coordinated and sometimes off- center flows suggest that the upbeat free form improvisational sequences abide by an underlying sense of camaraderie.