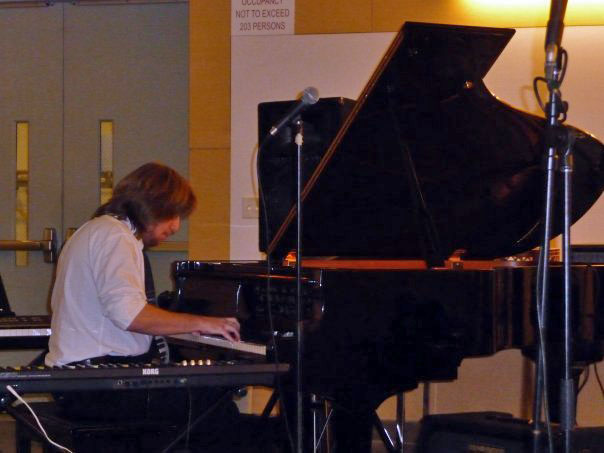 view slideshow
By Brett Sandler
June 23, 2011
Sign in to view read count
Meet The Brett Sandler Trio:
The Brett Sandler Trio: I'm a classically trained pianist who began studying Jazz in college. I started composing my own jazz tunes after listening to Wayne Shorter for the first time. I love music, movies, and videogames and enjoy spending my time on those three pursuits. I grew up in Rocky Hill CT, a typical suburban town in New England.

Adam Czerepinski: One day I told my mom I kind of wanted to play drums, and a week later she brought home a drum set, and so I became a drummer. I played a lot of music in high school, and then majored in it along with computer science at Hofstra University. I play Frisbee and run and jump around often. I like meeting new people and will someday move away from New York City, although it will be hard to leave a playground of such high caliber musicians.

Peter Longofono, now living in Astoria, NY, hails from a variety of different places, from Germany to Kansas. He didn't encounter serious jazz (i.e., gimmick-less) until his sophomore undergraduate year. He's been trying to make up time since then, with varying levels of success. When not performing/rehearsing, he loves to cook, hike, and especially to read. He'd love to live in Europe and translate German literature someday.

Peter: Charles Mingus, Mingus, Mingus! I would give just about anything to have met him at all. My time with Wayne Hawkins was extremely fruitful, as well as a short period I spent with Latin musicians in a specialized combo. Sink-or-swim situations like that forced my playing to another level.

I knew I wanted to be a musician when...
Brett: Ever since the day I started playing piano.

Adam: I realized that rhythm made so much sense to me.

Peter: It occurred to me that not everyone walks around all day with automatic music going in their head.

Your sound and approach to music:
Brett: I'm very harmonically focused, I like the interplay between changing chords. I like to find the common tones and weave them back and forth throughout the song. I always like to listen closely to whomever I'm playing with, and attempt to have their sound mesh with mine, fill in the cracks so to speak. I also like repetitive motifs and sounds. For instance, I'm enthralled by the sound of time being kept on a ride cymbal.

Adam: Observe her behavior from a short distance and, when the time is right, serenely embrace her from behind.

Peter: It's all about progressive arrangement for me. Knowing the capability of each voice, and then smashing through the barriers you erect for yourself. Discipline, discipline, discipline is the only way to always know exactly where and how to apply your ideas. One must develop the ability to approach the same material differently in each performance. Improvisationally, much can happen when there's full trust and a good measure of humor between the musicians.

Your teaching approach:
Brett: Fundamentals. You can't build a house without a proper foundation.

Adam: The teacher is more of a guide. It is good to teach strong technical fundamentals to allow the student to grow and adapt without inhibition, but the teacher must also consider the student for who he is and accept that he will take the music in his own direction.

Peter: Be able to sing absolutely everything you're doing. Be able to harmonize everything if need be. Listen for things that are done well in the music you hate. If you can't listen to the classical masters all day without constantly discovering things, you're not letting yourself be creative enough. It never hurts to ground yourself in a genre for periods, as long as the intent is to refresh the whole of your playing.

Your dream band:
Brett: I would want to be Wynton Kelly on the classic Miles Davis recording, Someday My Prince Will Come. Or be Jordan Rudess in Dream Theater.

Peter: This one's always changing, but lately I've had an unsatisfied hankering for standard jazz instrumentation with the capability of lapsing into gypsy jazz at the drop of a hat. I also prefer instrumentalists who double on vocals, and vocal harmony that explores chord extensions thoroughly.

Road story: Your best or worst experience:
Brett: One time in college, I played an impromptu show with a jam band called Sunfighter outside of our schools walking bridge that crosses the highway. In order to power all of our instruments, we needed to purchase a 50-foot extension cord. I still own the extension cord to this day.

Adam: One time my punk rock band was scheduled to play a show with a bunch of other bands including the headliner, The Act, who came from far away just to play. There happened to be a huge snow storm that night, and nobody ended up coming, including the other bands except for The Act. Regardless, they ended up playing and actually put on the best show I had ever seen, full of stunts and props, just for my band and the owners of the club!

Peter: Oh man. When I was a teenager in Danbury, CT, we played a few times at the old Empress Ballroom. What a disaster those shows were. I literally had no idea what was going on. No concept of the sound environment on stage, or how to pace a composition, or what constitutes decent harmony. All the bands were awful, just about every night, and I couldn't handle a drink at all. Not a good time in my life.


Brett: There's a little place in Hempstead NY known only to a lucky few as Lenox House, I played in that basement like I was playing Madison Square Garden, and everyone danced. Nothing quite like it.

Peter: There's a great place in Lawrence, KS called the Replay Lounge. In the summer, on those fortunate nights when the humidity is manageable, the outdoor stage in back is an amazing place to play. Decent beer comped for the band, enough room to move, very competent sound—it all adds up to a great performance space. The patrons aren't afraid to dance, either, and they'll let you know what they like. Oh, and there's amazing barbecue.

Your favorite recording in your discography and why?
Brett: Would have to be the EP we just put out. I love the tunes that I've written and this whole experience has been incredible.

Peter: I recorded an EP about a year and a half ago with a rock trio in Kansas. It was grueling only because of the abominable icy weather, remote location, and complicated recording equipment. The session itself was amazing—the personalities and talent of the other two fellows really impressed me. A very cathartic and enlightening experience; as a result, my takes are now much quicker and (usually) more potent.

Adam: Anthem For the Earnest, Suspicious Activity; The Bad Plus, Because of the times when they're not in six.

Peter: Something Dave Brubeck? It's hard to remember.

What do you think is the most important thing you are contributing musically?
Brett: Hopefully, I'm conveying the message that music is at its best when it respects the old school, doesn't go overboard with the new school, and stays true to the vision of whomever wrote it.

Adam: That an entire song needn't keep a consistent tempo

Peter: Tonally, I bring a pseudo-Jaco Pastorius growl to proceedings—sometimes very trebly, but I find it interesting. Especially in a trio setting, my dynamic range creates a sense of progression in solo passages. Room to breathe, but control of tension.

Did you know...
Brett: I like to sketch with pencil.

Adam: I'm not a big fan of bacon

How would you describe the state of jazz today?
Brett: Hip, that's for certain, there are so many artists making really cool original Jazz music. But they need to be heard and unfortunately here in America, they aren't getting the attention they deserve.

Adam: Evolving at an exponentially increasing rate. So much so that the common ear can't handle the mutations that have happened and it refuses to try to understand them.

Peter: I'm generally optimistic, because there are tons of musicians who strive to make their idiosyncrasies viable. In other words, a Zydeco enthusiast has the option of artfully working that into more of a bop idiom, if that's their thing. Insane combinations do happen, everywhere, regularly blowing my mind. I also love the general propensity for wonky rhythms, and not just as a byproduct of wandering solos. I'm talking about tightly- arranged wonky, loping, or stuttering rhythms as part and parcel of the songwriting process.

What are some of the essential requirements to keep jazz alive and growing?
Brett: We need to support Jazz radio stations, Jazz media outlets, Jazz websites. Without the basis for distribution no one will hear all the exciting new music Jazz artists are making.

Adam: Make sure that new music can easily be accessed by musicians when they are exploring. The more creative music someone hears, the more creative they may write their music

Peter: On both sides of the divide (jazz-pop, indie-jazz, jazz-fusion), musicians have to pollinate. It's one thing to say that genre divides are crumbling, but it's another thing entirely to enact that hybridization. I also believe that incorporating "foreign" musical traditions keeps us on our toes and making surprising music.

What is in the near future?
Brett: Hopefully, lots of playing out and gigging, promo stuff, and then back into the studio to record more.

Adam: Soon I hope to record an album of tunes I have been writing over the past couple years.

Peter: As I understand it, currently we're arranging some exposure in the NYC area—shows, of course, as well as interviews, media packages, and website work. I'm excited to refine the material and make our rhythmic interplay telepathic.

Adam: I write lots of different kind of software.

Peter: I write copy for Siegel+Gale, a branding company based in Chelsea.

If I weren't a jazz musician, I would be a:
Brett: A secret agent. After all, my major in college was espionage.

Adam: A monkey, but then I'd still probably be a jazz musician.

Peter: I would be a visual artist of some sort.

About The Brett Sandler Trio