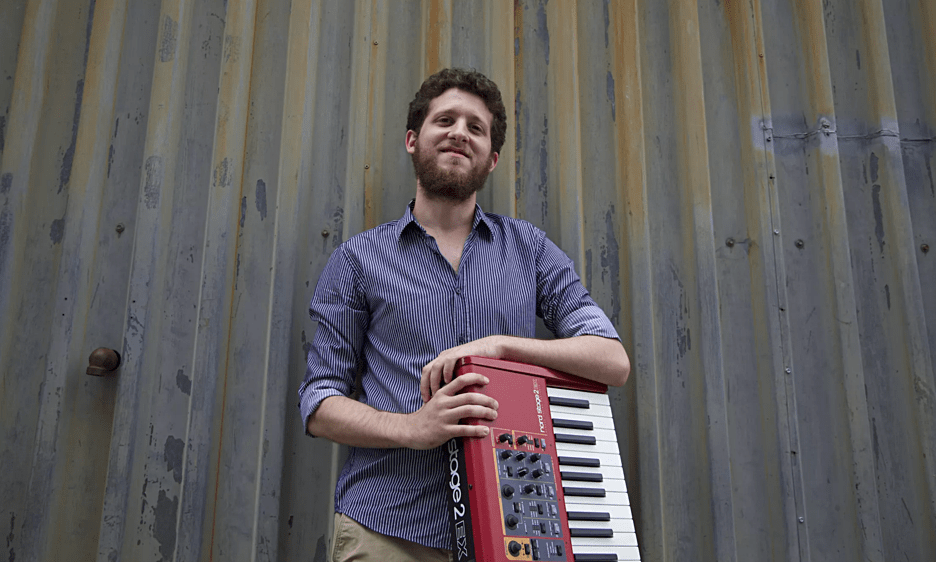 Israeli composer, pianist and organist Tal Klein started playing music when he was six years old. He was introduced to jazz at 14. He studied at the music department of the Katsanellson high school in Kfar Saba. During that time Klein was already playing gigs as a professional musician and at 17, placed 2nd in "HaSharon" regional competition.

Afterwards, Klein served the IDF between November 2011 and November 2014 as the lead pianist of the Police Orchestra in Israel. There he played at music festivals as well as at Karmiel Festival, Kleyzmer Festival in Tzfat, The President's House, Ha'Bima, The theater of the Jerusalem music academy and many more. He also performed with Isrraeli pop singers including Yoram Ga'on, Daniel Solomon, Nurit Hirsh, Galit Gi'at, and Kobby Aflalo. After successfully his military oblgations Klein worked as a music educator and played gigs all over the country with his projects: The Tal Klein Trio, The Tal Klein Quartet, and The Tal Klein Funk Band at the top venues in Israel including Beit HaAmudim, Costanza Bar, Levontin 7, Yellow Submarine, Einzav Center, Ra'anana Conservatory Music Hall and Birman.

In 2016 Tal moved to New York City to finish his studies at The New School for Jazz and Contemporary Music. During his studies and post graduation he collaborated with some of the finest artists in New York including David Schnitter, Hal Galper, Shai Maestro, Sam Yahel, Eric McPherson, Kris Monson, Guy Paz, Charles Tolliver, Yonathan Volchuk and many more. He released his debut album The Tal Klein Trio in June 2019. Today Klein continues to perform in NYC at venues including Shrine, Mezzrow, Red Room KGB Bar, Silvana, Williammsburg Music Center, Anyway Caffe and Me'or Manhattan.

Till the age of 12 I was studying classical music and had a hard time with it so I decided to quit my studies. I started to play from ear some pop songs of bands like Coldplay, Avril Lavigne, Green Day, Queen and The Beatles. After some research on the web I found a famous video of the Oscar Peterson Quartet playing "Cakewalk." I was shocked and I remember thinking this is the style of music I want to play. I decided to take jazz lessons and luckily I found a great teacher: Giora Boss. He brought my love back to classical music and music in general. After four years of intense studying, Giora told me it was time to take my music to the next level. I started my studies at the CJS in Tel Aviv (Center of Jazz Studies). There I was studying with teachers who were also the top players in Israel and some of them in the world such as: Yonathan Volchuk, Matan Chapninsky, Gil Sorin, Roni Ivrin, Harel Shachal, Vered Michaeli, Dany Rosenfeld, Omri Mor and many more. After moving to New York I was mentored by Grammy nominated Pianist/Organist Sam Yahel and studied with many other teachers in the New School for Jazz and Contemporary Music such as: Hal Galper, David Schnitter, Charles Tolliver, Eric McPherson, Haim Cotton, Doug Weiss, Richard Boukas, etc.

I was in high school. I was in a music department and most of my time was spent playing or practicing and I had so much fun.

My sound have been changing for years. In every style of music there are different approaches in many subjects such as time harmony and melodies. But one thing which you have to do in any style of music is to listen. Pay attention to what is going on and the only thing which should be on your mind is how you're going to make the music sound better.

If you would ask me what's my dream band when I was 15 I would immediately answer a piano trio with Brian Blade on drums and Christian McBride on bass but things have changed. I found that I sound my best when I have good chemistry and friendship with the musicians I'm playing with in order for me to feel relaxed.

I was playing in a band in a very important ceremony (I will not mention the name of the band). The drummer was feeling silly that day and during a speech, he succeeded to zip tie the belt loops of the oboe player's pants to the plastic white chair. At the end of the ceremony we had to stand to play the national anthem of the country we were playing in. Guess what happened? ;)

My first album. It was recorded in my home, I was calm and I had a great time with my friends who are also killing musicians!