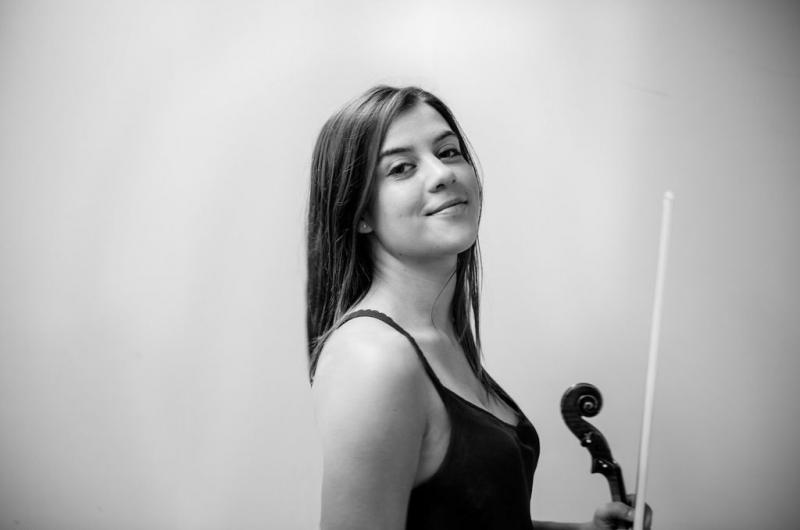 I am a 22-year-old jazz violinist living in Los Angeles. My parents were classical violinists in the Madison Symphony in Madison, Wisconsin, so I was raised with classical music. When I was 16, I went to Idyllwild Arts Academy in Southern California and met bassist Marshall Hawkins. Right then I decided to pursue jazz. I love jazz music, which is swing, blues, and improvisation. My goal is to use creative expression to uplift the audience, so they feel free and fearless, and most of all, the presence of love.

I've had many outstanding teachers. First and foremost is Marshall Hawkins, who started the Idyllwild Arts Jazz Program 26 or so years ago. He is from Washington D.C. originally and he played bass for Miles Davis, Shirley Horn, and dozens of other legends. Other teachers of mine were guitarists Bob Boss and Bruce Forman. I also owe a great deal to two friends who are young classical violinists studying at Juilliard, Dima Dimitrova and Michelle Tseng. They are always inspiring and very diligent, and consistently patient with me.

Influences? Jon Batiste, for his supreme command over the stage and his outrageous, fearless energy. Also for bringing every last member of the audience into his world every time he plays. He is so original and creative.

Stephane Grappelli, for his outstanding, refined sound and for changing the sound of jazz in general. I also admire his collaboration with Yehudi Menuhin which was humorous, beautiful, and above all, proved that musicians can indeed function well in a concert setting outside of their own comfort zones.

John Mayer, because I love the way he solos. He is so powerful, and he has personal stories to tell the audience while he plays. He is very human.

Wynton Marsalis, for knocking everybody out with the first note. I saw him live at Disney Hall in Los Angeles this year and I couldn't believe how much energy that man plays with. You can't help but to widen your eyes and feel great.

Martin Taylor, because he is an extremely humble, kind person. He is impeccable and a swinger in the most profound, elegant way. He plays so beautifully!

Louis Armstrong, because he was an impressive musician not only to other musicians, but to the general public. He hooked everybody in with those incredible solos! His music was simple, in a way, but packed a real punch.

I sight-read the tune "Skylark" when I was 16 years old, with Marshall Hawkins accompanying me on piano. That was in Idyllwild. I had been playing violin for about 13 years when that moment happened, but I was losing interest in playing classical music and it was not making me happy. Jazz was my internal revival.

Be free. Express yourself. Play with a sweet tone, plenty of swing. And make something happen.

I have not done much teaching, but in general, I want everyone to feel comfortable with following their own instincts, even if they seem foreign at first.

I am not sure, but one of the first I listened to on repeat was Improvisations (Verve, 1958) by Stéphane Grappelli. That album is pure joy.

I listen to a lot of different artists from a lot of different eras, but in the past week or two I've been listening to these recordings: Social Music (Razor & Tie, 2013) by Jonathan Batiste and Stay Human, Double Standards (P3 Music, 2008) by Martin Taylor, Peterson and Grappelli (Fantasy, 1973) with Oscar Peterson and Stéphane Grappelli, and also Paradise Valley (Columbia, 2013) and Born and Raised (Columbia, 2012) by John Mayer. I've also been listening to Scott Joplin and some Earth, Wind & Fire.

On the way back, I believe. Today, jazz is confused, maybe a little self conscious. Lacking in audience involvement and spirit. Hopefully this won't last.

To have no fear! To go on swinging in the spirit of love, no matter who you are or where you come from, or whether you're age 9 or 99. Also, it is necessary to support jazz, even if you don't have a gig or any money. You can take it to the streets or have a house concert. And music education must be supported so that today's youth can understand and appreciate American culture and music.

I will be recording a full length album in the coming months. Also, I am working on going on tour in Europe in summer of 2014 with a trio. I heard they like jazz over there! My grandmother is from Barcelona and I am 1/4 Catalan, so it would be fun for me to visit my Spanish roots and perform there. I'm starting a weekly outdoor jazz concert series on the USC campus that is free for everyone. These performances will be called Jazz Parades and I'll lead musicians from the top of the Campus Center steps down and through campus. I want USC students to experience jazz and impromptu live music. I want musicians to gain experience letting loose with no fear. We will post pictures and videos, etc. to my website under the "jazz parades/ usc" tab.