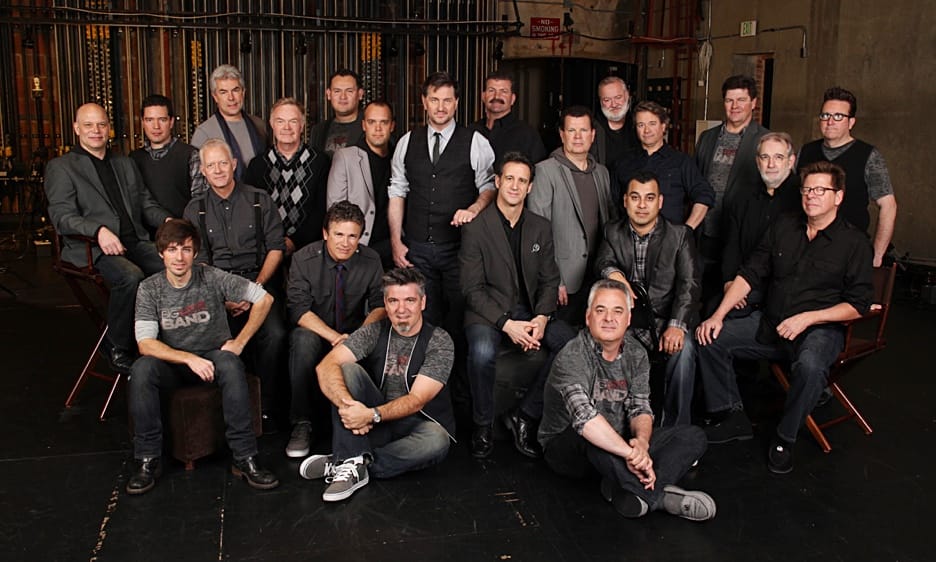 Having amassed 21 Grammy nominations, four Grammy wins and three Emmy wins, Gordon Goodwin is one of the most decorated big band leaders in the 21st century.

As the leader of Gordon Goodwin's Big Phat Band, an internationally renowned ensemble with a reputation as one of the most exciting in jazz, the BPB has released eight critically acclaimed records, including Life in the Bubble, (Telarc, 2014) which garnered four Grammy Nominations, and won the Grammy for "Best Large Ensemble Album." Their most recent release The Gordian Knot (Music of Content, 2019), which features a tribute to Tower of Power ("T.O.P. Adjacent"), the Latin flavored, "Buddy Complex," and an 8-minute re-make of "The Incredibles"—he won a Grammy Award for "Best Instrumental Arrangement" for his work on the feature film The Incredibles and also contributed to its 2018 sequel, Incredibles 2—was both a critical and popular hit.

He has written and worked with artists like Ray Charles, Christina Aguilera, Johnny Mathis, John Williams, Natalie Cole, David Foster, Sarah Vaughan, Mel Torme, Leslie Odom Jr, Idina Menzel, and Quincy Jones, to name just a few. His charts are played all over the world, and along with his method books and CDs, Gordon is an inspiration for thousands of young musicians.

He is also the host of the popular program, Phat Tracks with Gordon Goodwin, airing since 2016 on KJAZZ, America's jazz and blues station.

My piano teacher Janet Hodges was the first person to encourage me to compose something. I was in first grade and got it in my head early on that I could perhaps create my own music. Then my high school band director Robin Snyder was enormously helpful and inspirational.

Followed by my college instructors, especially Joel Leach and Bill Calkins. But aside from that, I made it a point to learn as much as possible from every artist I could. And not just jazz musicians, I got deep into classical composers as well as pop musicians. I think the music of the Big Phat Band reflects those diverse influences.

The minute I heard the Count Basie Orchestra when I was in 8th grade I knew I had found something very meaningful to me. They were playing the music of Sammy Nestico, who would eventually become a good friend and colleague and right after that, I composed my first big band chart. I can never re-pay Sammy for his inspiration.

And there it is, the primary task in your life: Find out who you are and what is important to you. Both as a person, and as an artist. My own sound represents the things I believe in, including a balance of melody, groove and harmonic considerations. Along with a wide stylistic range, without musical barriers.

I strive for a balance of honesty in conveying my impressions of a student's work, along with a desire to make a solid connection with the student so that they will accept my comments as a tool for growth, even if they are hard to hear at times. I treat each student as an individual and some students respond to different teaching approaches. I am kind, but clear in my comments to them. And I am honest about my own strengths and weaknesses. Students seem to find some reassurance in that.

How hilarious was that? Don't get me wrong, I am grateful that Hef was such a supporter of jazz, but those bands would have sounded pretty rough had they actually ever played together! The best bands are comprised of people that are willing to sacrifice their own needs in order to be a member of a team. Sometimes All Star musicians are not of a mind to do that. The best bands have people willing to show empathy to all the other musicians, and put their own egos aside.

Sometimes you can find bands of A-list musicians who do that, to be sure. And then comes the issue of commerce. Let's say you are just starting out and need to convince musicians to play your music but you can't pay them what they are worth. How long can you keep that together? As much as musicians love good music, they also love paying their bills. So I think it's important to find musicians that have a balance in how they approach both art and commerce. And finally, I look for musicians that have a sense of gratitude and whose playing reflects that quality.

I hate that question! How to answer a question like that? It is impossible to compare one artist to another, so the minute I pick a Miles Davis record, I remember all the Thad Jones and Mel Lewis records I love, and then the Cannonball Adderley records I love and then I remember Oscar Peterson and then Chick Corea and that reminds me of John Williams, which reminds me of Igor Stravinsky and then I remember how much I love Stevie Wonder and Earth, Wind and Fire and then... you get the idea.

I was just out of college and did a tour of Europe with Louie Bellson's big band. I was the youngest guy in the band and was playing with living legends and I was completely freaked out the entire time. My stomach was a nervous wreck and I was never very comfortable for the entire two-week trip. In retrospect, I learned a lot from the experience and paying those dues is an important part of any musician's growth.

The Big Phat Band has been fortunate to perform in some amazing venues across the world. We have particularly enjoyed The Blue Note Tokyo, The Walt Disney Concert Hall, The Hollywood Bowl, Herb Alpert's Vibrato Grill Jazz, Catalina Jazz Club, Smetana Hall in Prague and many more.

The only thing I can do is present my feelings about music in the most honest way possible. I try to stay open to new ideas and keep growing as a musician. And hopefully, the listeners will stick with us on the journey.

My parents bought me a Buddy Rich record called Swingin' New Big Band. (Pacific Jazz, 1966) I could still sing you every note of that record.

Submitted under protest! It is an impossible task to narrow this to five choices, but... here you go:

It is at once quite exciting from an artistic point of view but also in a very precarious state, from a marketing point of view. This music cannot survive unless we find a way to grow the audience. And the fact that people do not pay for music any more may be the final nail in the coffin. Having said that, there are many young artists who are willing to make the sacrifice required to sustain their careers and play the music they believe in. But for many years, jazz musicians neglected and disparaged the need for good marketing, thinking that it would pollute the integrity of their art. I think this was quite misguided and we are still paying the price of this thinking. We must find a way for artists to create music of honest artistic intent, but also show our audience that jazz can still be relevant and not just a nod to nostalgia or a musical history lesson.

Being an artist is an organic and fluid thing. You must remain curious and willing to learn and grow and let the new information you obtain affect your music as it will. Put a high value on honesty and avoid contrivances. Your audience can tell the difference between a genuine effort and an insincere one. Retain your sense of wonder and above all, gratitude. A life in music is an incredible gift. Cherish it!

The Big Phat Band just released a new EP called The Reset. We will be recording more music in the coming months and release it all on a CD late in 2022. Thankfully as COVID recedes, gigs are starting to come back in again, and we can't wait to get back up there again!

At this point in my life, I don't really experience fear when I play. It's not that I am incapable of screwing up— that happens all the time! But I know that if I am 100% committed and giving my best effort, I can accept how things play out on a given night. But most nights with the Phat Band are a joy.

I guess one of my own songs, but it seems a little egotistical for me to weigh in on that. If I had a memorial, it wouldn't be for me, but for the people left behind. I imagine my loved ones would make that call.

I have music in my head all the time. It never stops. Right now, as I'm typing this, notes are bouncing around up in there! Sometimes it's a tune I recently heard, but more often it's something I happen to be working on at the time. As for the shower, I usually listen to a podcast while I'm washing up.

I wanted to be an animator, but my draftsmanship wasn't good enough. But I am a serious student of that artform. I have all the books, own some vintage Disney production cells and am a hard-core animation geek. That's why it was a thrill for me to work on The Incredibles and on the Warner Brothers animation stuff I did in the '90s.

Another hard question. I'd be thrilled with any one of these people, in no particular order: John F. Kennedy, Thad Jones, Claude Debussy, Igor Stravinsky, Leonard Bernstein, Walt Disney, John Williams, Kobe Bryant, Quincy Jones, George Gershwin. Why? I admire people of accomplishment. People who knew who they were and shared that with the world without apology.

To pair with our series' Jazz Uncorked/Jazz & Juice, what's your favorite wine, bourbon or adult beverage?

I don't drink very much, but I do like a nice Cab. Lately we've been digging the Schweiger 2015 Dedication. It's from a Napa winery run by Andy Schweiger, who is also a jazz saxophonist and big supporter of the arts.