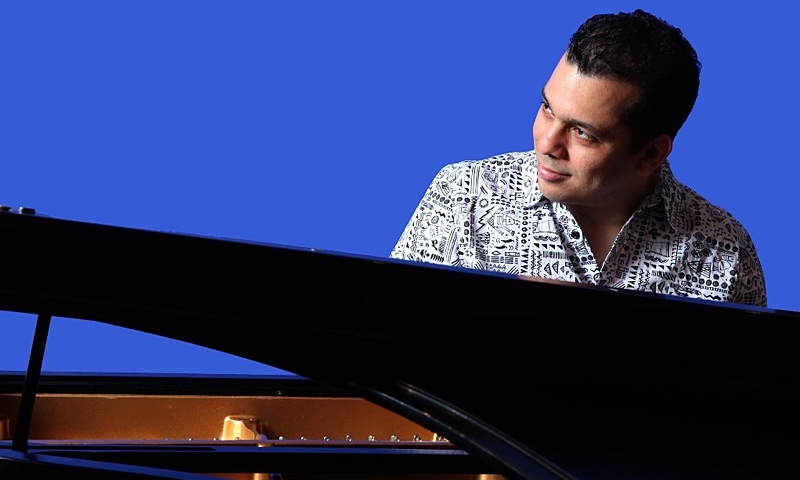 BY CESAR OROZCO
August 24, 2015
Sign in to view read count
Meet Cesar Orozco:
Orozco, a prolific pianist, composer, and arranger, fuses jazz with Cuban and Venezuelan musical styles in unexpected ways that fans in North and South America find irresistible. Born in Cuba in 1980, he moved to Venezuela in 1998, then to the United States in 2012. He has performed and recorded with numerous international artists and toured extensively (United Kingdom, Germany, Switzerland, Spain, Scotland, The Netherlands, Colombia, Argentina, and Mexico). He holds music degrees from both Peabody Institute in Baltimore and from the National School of Arts in Havana, Cuba. Orozco has been a guest artist on more than 50 recordings and has produced two other albums with his band, Kamarata Jazz: Son Con Pajarillo (2007) and Orozcojam (2010). The latter received four nominations and was awarded Best Vocal-Instrumental Album at Cubadisco 2012, the most important event of the Cuban recording industry (similar to the Grammy Awards in the U.S). Orozco's third album a leader, No Limits for Tumbao, comes out in August 2015 on the new international label Alfi Records. Orozco has worked with such names as Paquito D'Rivera, Pedrito Martinez, Gary Thomas, Yosvany Terry, Luisito Quintero, Giovanni Hidalgo, Alex Norris and Paul Bollenback. He wrote music for a highly successful musical in Venezuela and has begun working on a similar project in New York City Orozco is releasing his latest CD, No Limits for Tumbao, on the new international label Alfi Records in early September. He has just moved to New York to work on a musical there and to be able to more easily perform in New York City venues with his band.

Teachers and/or influences?
I have a lot of influences, but I would say that some of the most important pianists I've been listening to for years are Chucho Valdes, Chick Corea, Michel Camilo, Michel Petrucciani, Otmaro Ruiz (Venezuelan pianist based in L.A), and Bill Evans. Although I was playing Jazz and popular music from many years ago, the first time I formally went to any school to study Jazz was when I attended the Peabody Conservatory in Baltimore. My teachers there were Tim Murphy, Alex Norris, and Gary Thomas. However, more than ten years ago I had the opportunity to study with a great Cuban trumpet player Julio Mendoza, who is based in Venezuela.

Your sound and approach to music:
It's difficult to me to define my own sound, but if I have to do it in a sentence I would say that my playing and writing style is a blend of Cuban, Venezuelan, and other Latin-American genres along with a strong Jazz influence. All those elements (but not at the same time) can be heard when I improvise a solo or when I'm accompanying any music style, and even arranging or composing a song

Your teaching approach:
I always recommend that my students listen to as much different kind of music as they can. That way, they may be able to know and play not only one type of music, but also music and genres of other countries or areas. It's a wide world out there and they should be prepared to face any musical challenge they could have. In my experience, being a versatile musician allows you to have bigger jobs opportunities. It enriches your creativity and increases your possibilities to achieve a successful career as a musician.

Road story: Your best or worst experience:
I remember I was touring in The Netherlands about 10 years ago with a big Venezuelan show, and we were doing a very long road trip between to get our next city for our performance. We had been traveling for about 3 hours already and we still had at least two more hours ahead. Suddenly, one of the musicians who was the singer of the show borrowed the cuatro from the cuatro player and started singing a very well-known Venezuelan traditional song. By that time, we were on tour for more than a month, and that song touched the hearts of the whole company on that bus. Some of us were in tears, some others started to sing along with our singer. After that first song, we didn't stop singing, screaming, and smiling until we got our destination. It was a great experience because for the rest of our trip, we felt we were at home with our families and at the same time, we realized that we were there to exalt and represent the culture of our country. It was such a special and unforgettable road trip.

Favorite venue:
I have played in a lot of great venues, but definitely one of the most impressive has been the Kennedy Center Millennium Stage. The sound, the acoustic piano, the technical staff, and the audience were simply amazing.

Your favorite recording in your discography and why?
I don't have only one favorite recording because I like many different kind of music in the same way. However, if I have to mention one, I would say that all the recordings I have by Juan Luis Guerra are some of my favorites ever. Many reasons for my choice: His musicianship, his arrangements, his lyrics, and the quality of the sound of all his albums. It's not easy to be a big star and having all those qualities at the same time. That's why he definitely makes a difference in the music business nowadays.

What do you think is the most important thing you are contributing musically?
I think it could be the mixing between Cuban and Venezuelan traditional music with jazz. There are many other artists who have been working on Cuban jazz for years. In Venezuela there are also very talented musicians doing amazing things mixing Venezuelan traditional music with jazz, world music, etc., mostly during the last ten years. In my case, I'm trying to have both worlds together, sometimes mixing Cuban and Venezuelan rhythms even in the same piece, which is something that I haven't seen done by other musicians before.

Did you know...
I'm a pretty good dancer of Salsa music and I love soccer.

How would you describe the state of jazz today?
Jazz has expanded throughout the world and musicians from different countries have adapted its harmony and improvisation language to theirs own music and culture. That expansion has allowed a new stage for Jazz music and musicians over the world who are experimenting new path, sounds and ways to reinvent themselves and the music they are playing. I strongly believe that Jazz and all what the word itself represents nowadays has still a great worldwide audience. However, we need to understand that the concept of Jazz now is not only about a swinging band where the bassist is playing walking bass, the drummer plays his eighth-note jazz style cymbal pattern, while the pianist, guitarist or horn player plays a virtuoso or soulful solo over a complicated or simple harmony. Jazz started like that, but right now it has evolved into something much broader.

What are some of the essential requirements to keep jazz alive and growing?
Traditional Jazz sound and repertoire are still alive, but it's very difficult to create something new and better over the same music that has been played years after years by the masters of this music. New generation of jazz musicians must learn from all those masters, but the challenge is how to create something new and innovative without losing the essence of any type of music: rhythm, melody and in case of jazz, improvisation. In my opinion, the key point is the creation of new compositions with a high level of performance. Very innovative and original jazz arrangements of folk music are also a good way to keep this music alive. You can always make a very good arrangement of any well-known jazz standard piece, but there is always the risk to do an arrangement of "All the Things You Are" that you might think is very original, but it results that someone else has already done or will do a very similar version of the same tune. If we are talking about keep jazz alive and growing, a new and well-performed original music and/or arrangements are necessary.

What is in the near future?
I have a lot of projects in the near future. I'm moving to the New York area in July 1st 2015. There are many reasons for making that decision, but one the most important is because I'm doing a composition work for a musical, which will be probably premiered in New York by 2016. I would also be the music director and pianist of the show as well. Also, I'm very happy to announce that a new international record label called Alfi Records has signed me. My new album No Limits for Tumbao will be released on August 25, 2015 and will be promoted and distributed worldwide. It's important to mention that major jazz figure such as Cuban master of saxophone and clarinet Paquito D'Rivera, Cuban singer and percussionist Pedrito Martinez, the legendary saxophonist Gary Thomas among many others are some of the special guests in the album.

What's your greatest fear when you perform?
I think that more than fear, I always have a big expectation about how the audience will connect and react with the music I will play for them. When I'm in the stage, either with other musicians or playing by myself, I need to feel that the audience is in some way involved with my performance. An artist should be able to transmit emotions, but the challenge is how you can achieve that through your art. The quality of a concert depends many of times on the energy of the audience. At least, that is my case. Sometimes, they make me feel that I'm playing the best concert of my life; some others could be totally the opposite case. The bad news is that there is not a specific formula to captivate an audience, because every single one is going to interact in a different way. The good news is that most of the times, the magic of music wins the fight against the bad energies or any negative situations I might face when I am playing a concert.

What song would you like played at your funeral?
I never have thought about such a thing.

What is your favorite song to whistle or sing in the shower?
When I'm taking a shower, it is one of those moments when I prefer the silence rather than any other thing. I'm thinking about music almost every single time, even in the shower. However, it doesn't mean that I need to exteriorize that melody, rhythm, or whatever I have in my head in that moment.

By Day:
I'm a full time musician, and I teach some private lessons during the day.

If I weren't a jazz musician, I would be a:
I really love my profession. I can't imagine being any other thing but a musician. Music is my job and my hobby at the same time.