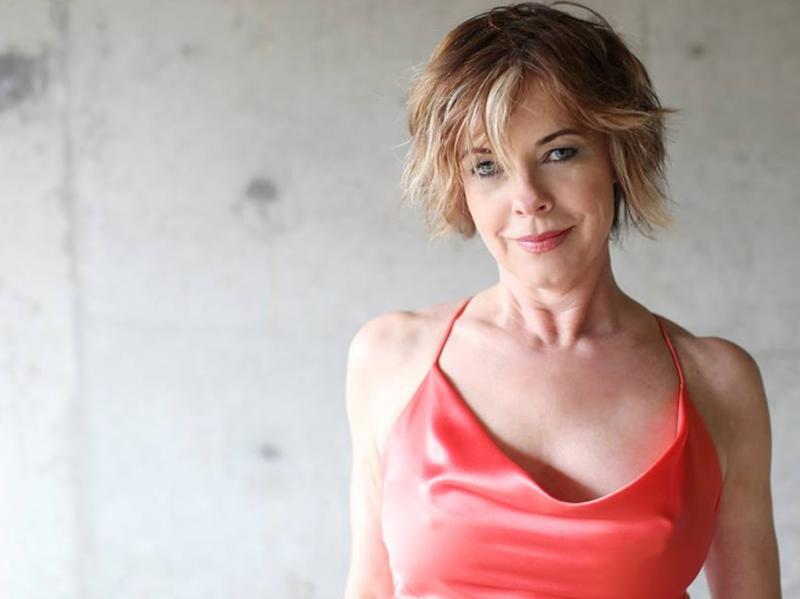 view slideshow
By Barbara Lusch
November 5, 2014
Sign in to view read count
Meet Barbara Lusch:
Barbara Lusch has a unique and compelling way with a song that goes straight to your heart. Her new recording, Rock Me Sweet (Slimstyle Records), is a surprising and magnetic reinterpretation of some of the best loved rock anthems of the 80's. Well-known hits of male rock icons such as Bruce Springsteen, Bon Jovi and Bono have been transformed by Barbara into sophisticated, sexy, and soulful songs. You can hear "Dancin' in the Dark" sparkling with seductive style and U2's "Where the Streets Have No Name" becoming a cry of despair that evolves into a statement of triumph.

Teachers and/or influences?
My grandmother, Alice Lusch, taught me how to love music. I grew up singing with my sisters and grandmother. We were often accompanied by my grandfather playing accordion and my father playing harmonica. My grandmother had 3 sisters with whom she sang professionally. Once I heard their 4 part harmony, I was hooked.

My second influence was my high school music teacher, LaRoyce Findlay. She led a swing group that performed around the city, as well as competed. She also directed a musical production each year. I was involved in all of it.

She was a wonderful mentor, and kept me so busy that, I couldn't get into too much trouble. When I rehearsed and performed in my first union theatre job, many times I referred back to what I had learned in high school. Mrs. Findlay taught me how to be a professional performer.

I knew I wanted to be a musician when...
When I was a little girl, I listened to my Grandmother and her sisters harmonize. There voices were magical and mysterious to me. I'm the youngest of four kids and, quickly learned that when I sang, it not only made me feel good but, people in my family would listen to me. I would spend hours on my backyard swing, singing and daydreaming about performing on a big stage. It made me feel free and it was the only place where I was really happy. I think i new then that singing and performing was what I wanted to do.

Your sound and approach to music:
I think my sound is intimate and straight forward, probably more like some of the singers from the 40's & 50's. My tone is pure. I like to hear and sing the melody and I love telling a story. I approach a song like an actor does a monologue. I'm very specific about each lyric. If I can't relate the lyric to my own life experience, I'll make up a story that will. I listen to different versions of the same song , vocal and instrumental only. I go through the song focusing on one instrument at a time. For example I'll just focus on the bass part all the way through, then piano, then guitar, etc. I also like to play percussion to a song. it helps me with my phrasing and rhythm.

Road story: Your best or worst experience:
When I was singing with Pepe and the Bottle Blondes, we got a gig singing during halftime of a Portland Trailblazers basketball game. During our first song, we were met with a chorus of boos from the crowd.

We were horrified as you can imagine and couldn't understand why the crowd disliked us so much. Did we show up on the wrong night? We stopped the song and walked off the stadium floor. It turns out the crowd was not booing us. They were booing replays from the first half. The best part of the story is that next day, several of the sports talk radio stations talked about our plight. The sports talk guys took mercy on us and said we shouldn't have been booed. This turned out to be great publicity for us.

Canadians love me. I know this sounds crazy, but Portland attracts a lot of Canadian tourists. After most of my shows, I get to meet some great folks from all over Canada. So, I guess I can call myself an international star. Watch out Celine.

Finally, I had to show some resourcefulness to get to a gig this summer. I left for the gig with plenty of time to spare. But, ran into the Starlight Parade running through downtown Portland. My boyfriend and I tried every route we knew to get to the gig, but were stopped by the parade. I was over a mile away from my gig and couldn't carry my equipment. I saw a bike taxi pedaling by. I told my boyfriend to stop, I was going to the gig by bike taxi. The bike taxi guy was totally happy to bring me, and my sound system, to the gig. Not only did he take me to the gig, be we even talked one of Portland's finest into letting me ride in the Parade for several blocks so we could get to the show. Despite the unexpected delay, we started on time, and had a great show (with lots of Canadians).

Favorite venue:
Arrivederci, located on the east side of Portland. I love the fans that come regularly to this gig. They love jazz and live music. The owners treat me like family . Performing there is like celebrating with friends and family. Steve Hanneman, Arrivederi's owner, comes out of the kitchen during the last set and jam's with us on his saxophone, and my biggest fan, Rosebud (my 80 lb. Goldendoodle), gets to come in after hours and hang out with the crew.

Your favorite recording in your discography and why?
It would impossible to choose a favorite. My favorites change over time. However, the coolest experience was recording at Capitol Studios in Los Angeles for the Rock Me Sweet album. Singing in the same studio where so many greats recorded was an amazing experience. I sat on Frank Sinatra's stool. The bar was definitely raised by the environment, my engineer Al Schmidt, and my conductor Earl Rose.

The first Jazz album I bought was:
Let's Get Lost by Chet Baker. I fell in love with his phrasing.

What do you think is the most important thing you are contributing musically?
Everyone that has heard the songs from "Rock Me Sweet" have said how much they enjoyed hearing the lyrics clearly. I have heard over and over that it's like hearing those songs for the first time. So, I guess I am reintroducing some beloved songs to fans that have listened to them for years. So many people love the 80's for the great music, funky hair styles, and questionable fashions. This is like reliving the 80s in a more grown up way while still having fun. I would love it if these great rock anthems would become part of the American song book the same way "Fever" and "Stormy Weather" are now.

Did you know...
My family and friends called me Boo Boo from when I was a little girl. We were visiting Yellow Stone Park and my dad started calling me Boo Boo from the Yogi Bear cartoon, and it stuck. Yes, my name was Boo Boo Lusch through college. Once I started performing, I decided to drop my lifelong nickname of Boo Boo. I've had many people tell me, I should keep it because people will remember it. I just can help but worry , that people who here "a performance by Boo Boo Lusch" might think there coming to different kind of show!

So, while Barbara is my professional name, my family and friends still call me Boo Boo.

What are some of the essential requirements to keep jazz alive and growing?
We need to have more music education and music history in the schools. Many of my close friends teach music as well as perform. While it is great they are teaching the next generation of musicians, it is too bad that the only kids getting this instruction come from families that can afford private lessons. It would be great to support our local Jazz clubs and get more people out listening to live music.

What is in the near future?
I am going to do a CD Release Show on November 13th at Wilfs Restaurant and Bar in downtown Portland. We have a 9 piece band which will include a string quartet. This will be the first "Rock Me Sweet" show. We're hoping it will be the first of many.

I'm developing a revue-style show based on "Rock Me Sweet" and it's relation to my life and career. I've always wanted to do a cabaret-jazz-pop type show. It will be a blending of the songs and lyrics with some of my experiences that are pretty much universal, love, loss, looking back to a happier past and enjoying a hard-won freedom.

What is your favorite song to whistle or sing in the shower?
Peggy Lee's version of "It's a Good Day"

By Day:
I'm in advertising sales and have shared my job for the past 13 years with an amazing woman. We started the job share when she started her family and I got more involved in gigging. We have fun, it's creative, and i wouldn't be able to follow my passion without her.

If I weren't a jazz musician, I would be a:
A therapist for young adults.