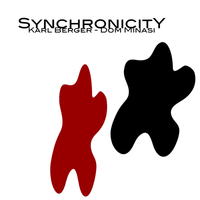 Pianist/vibraphonist Karl Berger and guitarist Dom Minasi are both forward-thinking and experienced composers, improvisers and educators, with discographies that goes back to the 1960s—including, in the case of Berger, collaborations with Ornette Coleman, Don Cherry and Don Cherry; and, with Minasi, 1970s work with Joe McPhee and Matthew Shipp.

Synchronicity's twelve freely improvised duets were recorded in 2010 at Berger's Woodstock studio. All rely on an emphatic and patient interplay that stresses the melodic and harmonic avenues of such a coupling, as well as the breadth of the pair's musical vocabularies.

Their improvising styles may differ—Berger's playing possesses a strong rhythmic edge, even when he plays the piano, while Minasi attempts to sketch loose sonic structures—but their mutual respect and deep listening turn the immediate and urgent interplay into cohesive pieces of music. The symbolic "Chop-Chop" is a good example of the duo's attitude, Berger busy exploring different fractured rhythms while Minasi investigates extended techniques of fretting the guitar strings; but both always respond to each other, never losing the intensity of such an interaction built from scratch.

Some improvisations emphasize an abstract sound ("Waterfall." Others as "Thursday's Child," "She" and "Prophesy"), developing like a stories with many nuances and twists in the thrilling plots, while "Bach?" is a playfully distorted interpretation of themes associated with Baroque composer Johann Sebastian Bach.

A masterful set of improvisation.