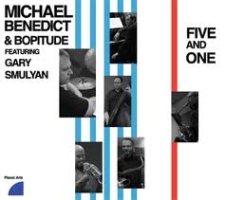 Diamond hard bop is alive and well and living in Michael Benedict & Bopitude's studio. The quintet's debut, Michael Benedict & Bopitude (Planet Arts, 2011), established the group as a premiere hard bop unit employing the classic trumpet-tenor quintet format used by Miles Davis, Art Blakey and various others. For this edition of Bopitude, drummer Benedict adds baritone saxophonist Gary Smulyan, whose Smul's Paradise (Capri Records, 2012) made its own hard bop waves. The pairing is an opportune one.

From old bop like Kenny Dorham's "An Oscar for Oscar" to new bop like Bobby Watson's "Quiet as It's Kept," Five and One is like one solid punch. The band's performance of Nat Adderley's soul-jazz classic "Work Song" is the real thing, performed in the vernacular. A call-and-response is set up between Smulyan's baritone and the united front of trumpeter Chris Pasin and tenor saxophonist Brian Patneaude. After the opening chord, Benetict's bass drum and snare shot kick the piece off at a brisk and swinging pace. Pianist Bruce Barth steadies the opening and holds down the edges for the solos. His own solo is full-throated and muscular. Bopitude makes a case for "Work Song" as the quintessential hard bop piece, giving Bobby Timmons' "Moanin'" a run for it money.