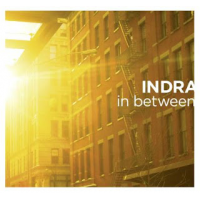 It's always a pleasure when an artist writes about the music on a record and takes the time to describe and dissect the thoughts that lie behind the sounds. However, it is rare to be treated to the kind of elaborated story that is unfolded in the notes to In Between, the second album by Danish-American group Indra. Here, singer Indra Rios-Moore tells about her childhood in New York with her grandmother and the events that led her to Denmark, where she lives today with her husband, saxophonist Benjamin Trærup, who is also a part of the group.

Writing about her motivation for telling her story, Indra reveals that the group's fans often have said that they missed the stories that were told at the concerts and so she decided: "to write a couple of stories that combine the themes of family and food along with actual family recipes."

As fascinating as it is to delve deep into the thick booklet and read the stories and recipes, the real treat is the music. The group's self-titled debut showed a confident and emotionally poignant singer who knew all corners of musical tradition; with In Between, Indra continues to explore a chamber-like sound, with Rios-Moore's forceful voice front and center.

The group pulls off convincing interpretations of well-known songs like "What a Wonderful World" and Neil Young's "The Needle and the Damage Done," which is pared down to bass and voice, with only a little instrumental flourish.

The album also includes three originals, with "The Marriage" a particular highlight. It sees the core trio of Indra, bassist Thomas Sejthen and Trærup joined by drummer Peter Dombernowsky and gentle guitarist Soren Dahl Jeppesen, who both add a rich tapestry of sound to the group's sparse aesthetic.

While the formula of bass, saxophone and voice still works wonders for the group, the song also reveals that it benefits from a broader palette of sound and as it turns out, the next step in the group's evolution is scheduled to be a record with Cuban musicians—pianist Gonzalo Rubalcaba and percussionist Ignacio Berroa. Right now, in between the past and the future, this short, but sweet record serves as a pleasurable way of waiting for the next chapter in this group's exciting story.

For All We Know; Repast; The Marriage; The Needle and the Damage Done; I Tried To love You; Que Emocion; Walking My Baby Back Home; Retrato em Branco e Preto; What a Wonderful World.

Title: In Between | Year Released: 2012 | Record Label: Self Produced