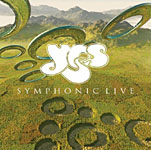 Of all the progressive rock groups that emerged in the late '60s to achieve widespread success, surely Yes is the one for which collaborating with a symphony orchestra was meant to be. Working with an orchestra too early on its second album, Time and a Word (Atlantic, 1970), Yes had yet to evolve towards the rock equivalent of symphonic music on the iconic Fragile and Close to the Edge (both Atlantic, 1972). Thirty years would pass before Yes would work again with an orchestra on Magnification (Eagle, 2001). Not in the league of Close to the Edge, perhaps, but respectable enough, and supported by a tour documented on the Symphonic Live (Eagle Eye Media, 2002) DVD.

It was one of Yes' best tours in recent memory, largely focusing on reworked material from the group's '71-'77 classics, but with some material from Magnification and a single nod to its '80s rebirth with the mega-hit "Owner of a Lonely Heart." With the double-disc set Symphonic Live Eagle Records finally makes the entire DVD concert available on CD. With four-fifths of the "classic" Yes line-up—everyone but keyboardist Rick Wakeman—the two-and-a-half hour concert with the European Festival Orchestra and guest keyboardist Tom Brislin winds its way through popular Yes material including the rocking "I've Seen All Good People," jamming "Starship Trooper" and dramatic "And You And I." Yes and bombast are two words often found in the same sentence, and though the strings, horns and percussion create no shortage of melodrama, equally there are unexpected passages of subtlety and nuance.

But it's the three extended pieces—"Close to the Edge," "Gates of Delirium" and "Ritual," ranging from 20 to nearly 30 minutes—that exploit the potent marriage of Yes' symphonic proclivities with the very real possibilities of an actual orchestra to its fullest. "Ritual," the closing movement from Yes' sometimes bloated Tales from Topographic Oceans (Atlantic, 1973), is transformed into the massive epic Yes always wanted it to be, with sonorous strings, blaring horns and thundering tympani. The equally expansive "Gates of Delirium"—second only to "Close to the Edge" in proving Yes' ability to deliver long-form tales performed with rock instrumentation but Stravinsky-like attitude—is the highlight, seamlessly blending blazing rock group antics with orchestral grandeur during its viscerally cacophonous middle instrumental section.

Throughout, the members of Yes—and Brislin who, while not considered a group member, should have been for his sheer energy and ability to distill the key parts of "true" Yes keyboardists that came before—play with a commitment that transcends any and all suggestions that Yes has devolved into a group of dinosaurs exploiting an aging fan base's desire to hang onto its youth. There may be some truth there—especially with tours that have taken place since then—but while Yes hasn't written any truly enduring material in a long time, Symphonic Live is proof that they are still capable of performing with all the qualities that made them such an innovative force back in the day.