By ELLIOTT SIMON
December 26, 2005
Sign in to view read count 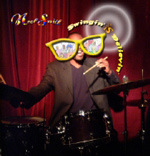 Swingin' is Believin' is evidence that Neal Smith is well aware of the Indian proverb "A good drummer listens as much as he plays. Not to say that Smith is a wallflower. Au contraire, he has that much-desired talent of solidifying an organized sound while driving the music in interesting directions. Coupled with an obvious connection to pianist Rick Germanson and bassist Michael Hawkins, Smith, pianist Cyrus Chestnut's first-call drummer, has elected to share the spotlight with no less than five hornmen to present a session that swings and bops as well as any in recent memory.

"Reality of the Hidden Truth, composed in the wake of the shocking Amadou Diallo killing, opens things up with an all-out assault of hot polyrhythmic complexity as the great Latin percussionist Renato Thoms mixes it up with Smith and Hawkins. Germanson's percussive piano work promotes the piece's intensity, as do Abraham Burton's quickly moving tenor solo and the reverent horn voicings from altoist Andrew Beals and trombonist Vincent Gardner. In addition, two other Smith originals, "Salt Fish, with its march-like rhythm and somewhat out Hart alto work, and the triple horn delight of "Twice More Once reveal Smith's impressive composing.

Germanson and altoist Antonio Hart swing it to perfection on the pianist's "Game Theory, while Beal's alto sweetly caresses the smoky nooks and crannies of Germanson's other contribution, the bluesy "In the Cut. Mark Gross lends a touchingly pensive soprano sax to the lovely piano ballad "I Have the Feeling I Have Been Here Before and Gardner's t-bone drenches the gospel piece "Lord I Give Myself to Thee in the blues.

"Bop Like is a multi-part adventure that has Hart's alto burning against a full speed rhythm until Hawkins and Smith combine with Germanson for the essence of understated cool. Hart's alto lovingly pays homage to Bud Powell on Wayne Shorter's "This is for Albert, and a bonus video brings NYC's hip Smoke venue into your home.

Reality Of The Hidden Truth; Game Theory; I Have The Feeling I've Been Here Before; Salt Fish; Twice More Once; In The Cut; Lord I Give Myself To You; This Is For Albert; Bop-Like; Bonus Video: Braedon's Blues.